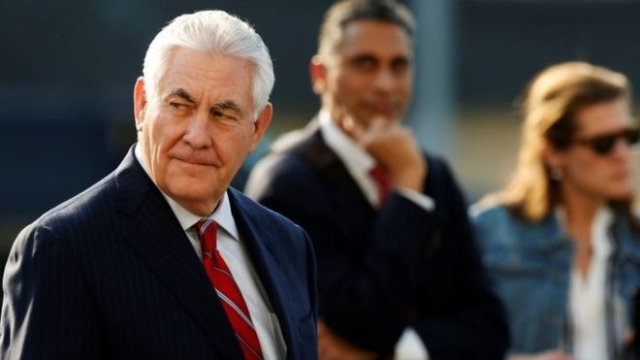 US Secretary of State Rex Tillerson and Homeland Security Secretary John Kelly are visiting Mexico to repair frayed relations between the two nations.

The US plan to expel to Mexico all illegal immigrants found crossing the US border regardless of nationality has angered the Mexicans most.

Relations between the neighbours are at their lowest point for decades.

Mr Tillerson and Mr Kelly face a tough task to allay their counterparts' concerns at Thursday's meeting in Mexico City.

The Mexican foreign minister said on Wednesday his country has "no reason to accept unilateral decisions imposed by one government on another".

"We are not going to accept that, because we don't have to."

Speaking to a group of US chief executives at the White House on Thursday, President Donald Trump acknowledged the Mexico visit would be a "tough trip".

"We're getting really bad dudes out of this country at a rate that nobody's ever seen before", Mr Trump said.

The new policy, which seeks to step up enforcement of existing US immigration laws, subjects nearly all illegal immigrants to deportation and speeds up their removal.

It also calls for sending back to Mexico immigrants caught crossing the border illegally, irrespective of where they are from, and deporting anyone charged or convicted for any crime.

Mr Tillerson and Mr Kelly will probably also face questions about the new guidelines in their meeting with Mexican President Enrique Pena Nieto.

US relations with its southern neighbour have also soured after trade-related skirmishes since Mr Trump took office.

The president has insisted that Mexico will pay billions for a wall along the US border, which prompted Mr Nieto to cancel a planned Washington visit late last month.

Mr Trump has also ordered a report, due on Friday, listing all foreign aid the US provides to Mexico.

It is unclear why he requested the review, but its inclusion in Mr Trump's executive order on constructing a wall along the southern border suggests he may use it for leverage in negotiations with Mexico.

The president has proposed to levy a 20% tax on Mexican imports to pay for a border wall.

Democratic senators urged Mr Tillerson and Mr Kelly to work through tensions with their Mexican counterparts on Thursday.

"We urge you to use your visit to disavow vitriolic rhetoric and forge a strong partnership based on mutual respect with the government of Mexico," the senators wrote in an open letter.