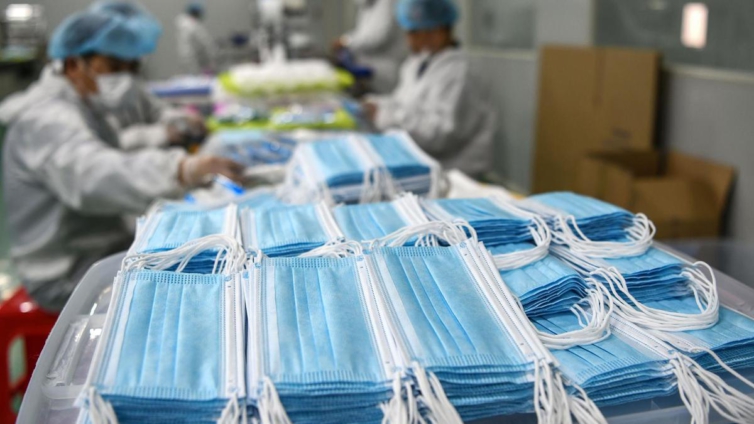 The change can be as simple as slapping a second mask over the one you already wear, or better yet, donning a fabric mask on top of a surgical mask.

Some experts say it is time to buy the highest-quality KN95 or N95 masks that officials hoping to reserve supplies for health-care workers have long discouraged Americans from purchasing.

British scientists estimate it could be as much as 70 percent more transmissible.

“The existence of more-transmissible viruses emphasizes the importance of us upping our game and doing not more of the same but better of the same,” said Tom Frieden, former director of the Centers for Disease Control and Prevention.

Frieden has called for people to wear higher-quality masks. “Yes, that is confusing to people, but the key is to share what we know when we know it and be frank about what we don’t know.”

But on a Wednesday town hall appearance on CNN, Fauci appeared to reverse course and instead stressed following CDC guidance, which does not call for wearing two masks or N95s.

New CDC Director Rochelle Walensky, appearing alongside Fauci, also warned that N95 masks are uncomfortable to wear and may dissuade consistent use if expanded to the general public.

The CDC encourages Americans to choose well-fitting masks with “two or more layers of washable, breathable fabric” and to avoid surgical masks and other face coverings meant for health-care workers.

President Biden has embraced masks as a core strategy for ending the pandemic, mandating face coverings on planes, in airports and in all federal buildings.

But he has not called for a medical-grade-mask mandate or mass production of high-quality masks.

The CDC and White House did not immediately respond to requests for comment.

Some public health experts said the federal government should have prioritized certifying or manufacturing better masks earlier so Americans do not have to fend for themselves to avoid counterfeits or upgrade their own.

The Trump administration in March coordinated with underwear makers to send five masks to every household, officials told The Washington Post, but the plans fell apart because of logistical concerns and other issues, including complaints that the masks looked like underwear or jockstraps.

Abraar Karan, a physician at Brigham and Women’s Hospital and Harvard Medical School has, since last spring, called on government and industrial leaders to mass-produce comfortable, effective masks.

He said the country could have avoided its current situation, with Americans learning how to better protect themselves largely alone.

“This seems just like the rest of our covid tragedy: We just don’t have answers, we just put out fires constantly, and we are asking people to do things on their own,” Karan said.

Linsey Marr, a Virginia Tech engineering professor who has researched mask effectiveness, said the public has better tools to reduce viral loads getting into the air and into bodies.

Without a medical-grade face covering, Marr said, people can get the best, simplest protection by wearing a cloth mask tightly on top of a surgical mask.

They can also make a three-layer mask by cutting a high-efficiency filter, such as a vacuum bag, to place between two tightly-woven fabric masks.

The difference is like getting two recommended doses of coronavirus vaccines instead of one — the additional mask offers more complete protection against the virus.

“Those standard cloth masks might be around 50 percent effective in terms of protecting yourself,” Marr said. “Maybe that was good enough before when combined with distancing and trying to avoid being in crowded indoor spaces.”

Masks are among the simplest tools in the fight against the coronavirus but also among the most politically fraught.

Some have turned masks into a symbol of government overreach.

Federal officials, including Fauci, were criticized when they urged people to cover their face after initially advising against masks in the early weeks of the pandemic.

Many experts said the changing guidance made sense as the shortage of protective equipment for health-care workers eased and scientists better understood the spread of the virus — including that it is spread by asymptomatic people.

But the initial confusion has been used to cast doubt on the proven efficacy of masking and the broader government response to the pandemic.

“So in other words Fauci and everybody else really has no idea what to do or what is safe,” former Major League Baseball player Jordan Schafer tweeted in response to a news article about the scientist recommending two masks.

“Fauci has told us not to wear a mask, to wear one mask, and now to wear two masks. Can we just get transparency please and accurate info.”

Cady Fusté of Seattle started wearing a cloth mask over a surgical mask this month. She made the shift at the advice of her mother’s doctor — a double lung transplant has put her mother at a higher risk.

“Science evolves. It makes total sense to me,” said Fusté, 35, who works in photo production. “If you think about it, if you can still smell someone’s perfume, it’s probably not that effective to something that’s airborne. A thin layer of cotton is probably not as ideal as a surgical mask.”

Behavioral psychologists say public health authorities must be mindful of a backlash as they start to shift mask guidance.

When people living through a crisis are confused, they often stick to their habits.

“When you look at leaders and you see mixed messages like the ones you’ve seen in the past, you tend to latch onto the ones that make you feel comfortable,” said David Abrams, a professor of social and behavioral health at New York University and a former National Institutes of Health official.

Abrams said it is essential to acknowledge that the guidance is changing and to be patient if people do not change their behavior immediately.

“Let’s face it: This is changing very quickly and science is making progress and sometimes we even make mistakes and correct them,” Abrams said.

“There’s nothing wrong with that or learning how to do something better. The double-masking is a good example of that.”

Linda Aldoory, a public health communications researcher at the University of Maryland, said there may be no swaying people who have already lost faith in the government to change their mask behavior, which is why other messengers should be enlisted.

“If we could get every famous influencer and celebrity to wear new masks and wear double masks … that might actually be a great way to start a new social norm to getting the kind of masks they want worn,” Aldoory said.

Danny Ryan, a 27-year-old who works in communications in D.C., said he was swayed to switch to two cloth masks in part after he saw Biden and Vice President Harris doubling up in recent weeks.

He also reconsidered the protection of a single mask after seeing his breath while waiting outside for a coronavirus test, although experts say that is not a sign of a malfunctioning mask.

“It just stuck in my head — they are wearing two masks, protecting them underneath and maybe more above,” said Ryan, who now keeps extra masks by his door.

“To be perfectly honest, I just feel safer doing it with updates in the news about the new variants.”