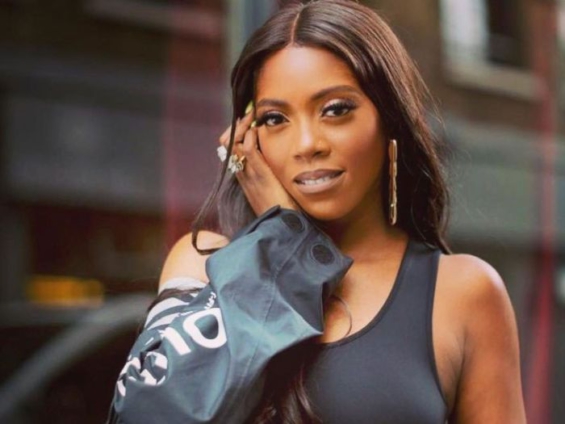 Tiwa Savage has reacted to her supposed sex tape which was leaked to the public on Monday, October 18.

In the video, while the face of the man involved did not show, the lady in the video bears a close resemblance to Tiwa Savage.

The songstress stated that she would not be intimidated by leakage of the video, neither is she ready to be blackmailed over something as natural as sex.

“You hated how I was able to control the narrative and get ahead of the story before it consumed me and how I’m able to joke on stage about something you thought should destroy me and make me feel ashamed. You must knock my head when you see me otherwise. Gistloversblog with my full chest,” she wrote.

Prior to Monday when the tape was leaked, Tiwa announced to the world someone was trying to blackmail her over a sex tape.

Speaking to US radio station Power 105.1 Savage said she would not pay any money to her blackmailer.

The video was first sent to her road manager on Wednesday who alerted her as she was leaving another radio station after an interview.

“I pay it now and then two months down the line you’re gonna come back… and then who knows if I do send you the money you probably will release it anyway,” Tiwa said.

Meanwhile, some social media users have taken to their accounts to air their opinion on the situation.

One user on Twitter, Elder Seun, with the handle @iamseunalaofin, noted that despite the leaked video, the singer is an amazing person.

He said, “Because Tiwa Savage’s personal activities are exposed in public doesn’t make her different or less human than most of us. Tiwa is amazing as always and she should be celebrated for all she has done for African music!! Tiwa is not an angel so mistakes like this should be overlooked.”

Another Twitter user and influencer, @DrOlufunmilayo, in a thread, opined that the sex tape was leaked on purpose.

He said, “Let’s not be fooled: That sex tape leaking was no mistake. And no, I’m NOT saying Tiwa (or the woman) leaked it herself. Conveniently, the man’s face is not showing. But the woman’s face shows.