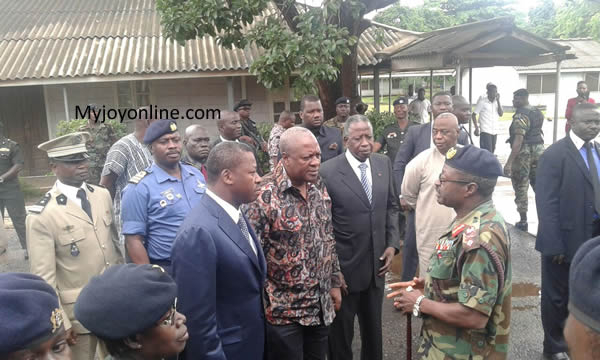 President John Mahama has been joined by his Togolese counterpart, Faure Gnassingbé and the Ivorian Foreign Minister to commiserate with victims of Wednesday’s flooding and fire incident in Accra.

The Presidents and Minister have been touring the various hospitals where survivors are being treated for burns and other injuries.

Government currently estimates that about 200 people have been killed following the flooding that engulfed most parts of the capital leading to an explosion at the GOIL fuel station at the Kwame Nkrumah Circle.

President Mahama, yesterday pledged È»50 million for the victims of the disaster.

Some bodies retrieved after the explosion

A vehicle submerged in the floods

GOIL has also set up a È»60 million fund to support victims and their dependents.

The company lost eight of its staff at the 24-hour service station at the Kwame Nkrumah Circle during the fire.

Tens of passengers, drivers and petrol station attendants were burnt to death in a horrifying fire incident at the fuel station while taking refuge there from the torrential rains.

GOIL is working closely with the Ghana Fire Service to ascertain the cause of the fire.

Joy News’ Presidential Correspondent Seth Kwame Boateng said the president and his entourage went to the Police Hospital from where they continued to the 37 Military Hospital.