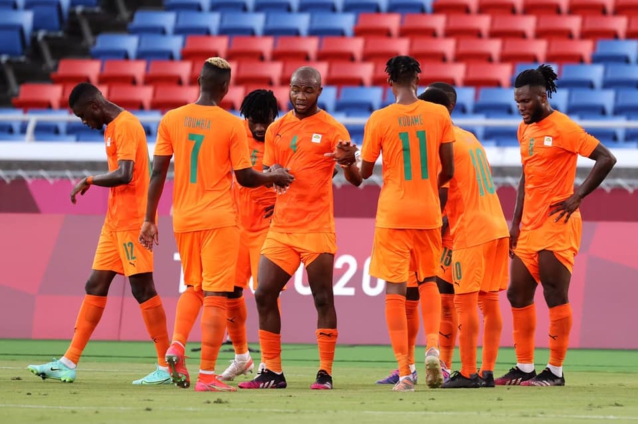 Ivory Coast, who were making their first Olympic appearance since 2008, went ahead in the first half after an own-goal by defender Abdulelah Alamri, but Saudi Arabia rebounded when Salem Aldawsari scored five minutes later.

In the other group D game, Everton striker Richarlison scored a first-half hat-trick as Brazil’s men started their Olympic campaign with a 4-2 victory over Germany.

In a repeat of the 2016 Olympic gold-medal match, the defending champions raced into a commanding lead despite Matheus Cunha having a penalty saved.

Richarlison scored on the rebound inside seven minutes, before heading home a second and curling in his third inside 30 minutes.

Germany put up more of a fight after the break as goals from Nadiem Amiri and Ragnar Ache made it 3-2, making it a nervous finish for Brazil.

But Bayer Leverkusen striker Paulinho finished brilliantly in injury time to make it 4-2 and put the game beyond the Germans.

Earlier, Spain were held to a goalless draw by Egypt in the opening game of the men’s competition despite the inclusion of Euro 2020 young player of the tournament Pedri.

A frustrating result for Spain was compounded by an ankle injury to Real Madrid’s Dani Ceballos as they struggled to break Egypt down.

Ceballos had Spain’s best effort, hitting the post in the first half.

Along with Pedri, there were several members of Spain’s Euro 2020 squad on display, with Mikel Oyarzabal, Dani Olmo, Pau Torres and Eric Garcia all in the starting line-up.

Spain were knocked out of the Euros by champions Italy on penalties in the semi-final.

Hosts Japan get off to a strong start

Also in France’s group, Japan’s home Olympic tournament got off to a great start with a 1-0 win over South Africa.

Real Madrid attacker Takefusa Kubo scored the only goal of the game in the second half.

It was a tough opening match of the Olympic campaign for Argentina in Group C as they suffered a 2-0 defeat at the hands of Australia.

Lachlan Wales opened the scoring for Australia, with Marco Tillo wrapping up the win in the 80th minute. Argentina’s Francisco Ortega was sent off for two yellow cards in three first-half minutes.

France’s Olympic tournament got off to a disastrous start as they were thrashed 4-1 by Mexico.

The best chance of a tight first half fell to Diego Lainez but his shot was cleared off the line.

Lainez was the creator of Mexico’s second-half opener, crossing for Alexis Vega to head home. Sebastian Cordova then doubled the lead with a neat finish at the near post.

Pierre-Andre Gignac pulled one back for France from the penalty spot, but two late goals for Mexico from Uriel Antuna and Eduardo Aguirre sealed the win.

Elsewhere, New Zealand made history with their first ever win in men’s football at the Olympics – a 1-0 victory over South Korea.

Romania joined New Zealand at the top of Group B thanks to an own goal by Elvin Oliva that gifted them a 1-0 win over Honduras.