Tolon Hospital yet to receive seed capital almost two years after it was commissioned - MyJoyOnline.com 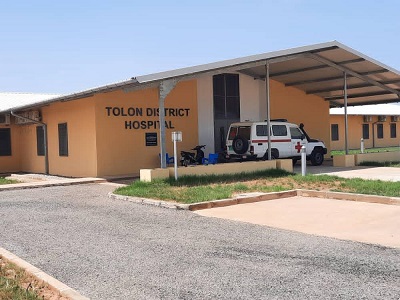 The Tolon District Hospital which was commissioned on November 23, 2020, by Vice President Dr. Mahamudu Bawumia is yet to receive seed money from the government.

The 60-bed ultra-modern hospital equipped with modern medical equipment which includes X- ray machines (stationed & mobile), ultrasound, surgical equipment, medical gases and patient monitors have had to depend on some sixty thousand Ghana cedis donation from the Member of Parliament for the area, Habib Iddrisu.

The hospital serves over 118 thousand people in Tolon and some adjoining districts like Kumbungu, North Gonja, parts of Central Gonja and some parts of the Sagnarigu Municipality.

The hospital is the main referral hospital within the sub districts.

Highlighting the state of the hospital to a three-member team from the Ghana Health Service Council in Tolon, the Medical Superintendent, Dr. Abdulai Osman said the hospital started with nothing; adding that they began without any supporting staff, drugs and non-consumables among other challenges.

“Starting from ground zero and having survived first four months, we aim to see how we can survive the rest of the year. These were some of the issues when the facility was handed over to us. There was no seed money, there was no single support staff, there is no security, no drugs and not a single utility vehicle, however, an ambulance was provided and by our innovation we have converted it into a utility vehicle to carry our consumables. We also have an equipped laboratory but no laboratory reagents, and our oxygen plant has never functioned since we started,” he said.

Dr. Osman added that he is currently under pressure from these suppliers because he had assured them the funds will be ready in the fourth month; adding that they may not be able to procure drugs from suppliers.

”We may not be able to get supplies in the coming months if we are not able to pay them” he said.

He made an appeal for financial clearance to enable the hospital employ permanent auxiliary staff, and buy a vehicle to enable them transport their consumables.

“We were able to start this facility because of the goodwill that I enjoyed with suppliers at my previous place. They were able to give us most of the things on credit for us to start,” Dr. Osman said

Dr. Osman appealed for funds to be able to offset the current bills, ”we are not demanding much, what we’re demanding is small money to be able to pay part of our suppliers.”

A Member of the Ghana Health Service Council, Isaac Kwasi Hammond, responding to the concerns said it could be categorized into three; Administrative, Managerial and Policy; adding that those that require policy intervention will be dealt with when the Council meets.

The Council later inaugurated a nine member Ghana Health Service Committee for the Northern Region headed by the Chief of Nanton, Naa Mohammed Baba Bawah, the Committee include Dr. John Bertson Eleeza, Regional Director of the GHS, the Chief of Sagnarigu, Naa Abdulai Yakubu, a representative of the Regional Coordinating Council, Sanatu Nantogmah, and a representative of the Muslim religion, Afa Issah Alhassan.