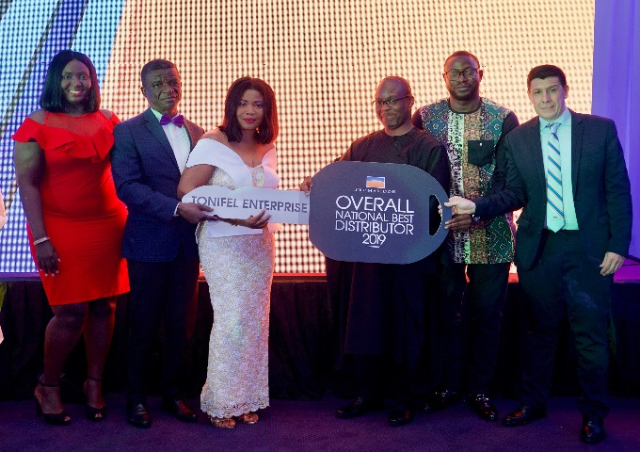 Tonifel enterprise in the Greater Accra region took the ultimate prize of over ¢120,000 making it the overall national best distributor for 2019.

Maaltima Enterprise was the first runnerup while Giant Traders was the second runner-up.

In addition to the prizes for these top three awardees, they also earned an all-expense-paid vacation to Dubai for themselves and their partners.

These awards were presented with over a hundred more awards at the just ended Promasidor partners dialogue and awards night.

The annual event was held at the plush Atlantic Hotel in Takoradi to appreciate and also to reward deserving distributors for their immense contribution to the growth of Promasidor for 2019.

Awards presented include best-performing distributors for Cowbell, Miksi, Yumvita and the Onga family for all regions across the country.

Samir Sadaoui, Commercial Director for Promasidor Ghana in an interview expressed his excitement about the event.

He also thanked the distributors for their contribution to the success of the business for the year 2019.

Mr Sadaoui also took the opportunity to congratulate all award winners and also urged the other distributors to strive for awards for the year 2020.

A total award package valued at ¢450,000 was presented to various distributors at the grand event.

The awards night was preceded by a conference with the distributors to review and discuss pertinent issues that affected the performance of distributors and how best they could be resolved.

The business also took the opportunity to introduce new policies and initiatives to bolster the partnership between distributors and Promasidor.