The Conservative Party plans to stand a candidate against Speaker John Bercow for his role in allowing MPs to take control of the Commons agenda.

Business secretary Andrea Leadsom accused the Speaker in the Mail on Sunday of “flagrant abuse” of process.

Breaching convention, the party plans to oppose Mr. Bercow in his Buckingham constituency at the next election.

Formerly a Tory, Mr. Bercow gave up his party affiliation when he took on the impartial role.

As the highest authority in the House of Commons, the Speaker chairs MPs’ debates.

In order to be impartial, the Speaker resigns from their party, and – while they still stand in general elections – they are usually unopposed by the main parties, and they do not campaign on political issues.

But Ms. Leadsom – who has clashed with Mr. Bercow in the past – said the Tories would ignore this convention and stand against him at the next election.

She said the role of the Speaker was to be “a politically impartial, independent umpire of proceedings” and to “protect the constitution and oversee the behaviour of the House”.

“But last week, the current Speaker failed us,” she said.

By allowing the use of Standing Order Number 24 – a procedure normally used to trigger emergency debates – to take over the Parliamentary timetable, Mr. Bercow had not “just bent the rules, he has broken them”, she said.

The move meant opposition and rebel MPs could pass a law blocking a no-deal Brexit, which the prime minister said undermined his Brexit strategy.

Ms. Leadsom said allowing the opposition to control the agenda in this way “ignores the government’s right to govern” and undermines democracy, prompting Mr. Johnson’s call for a general election.

“Bring it on, I say, and give us back an impartial speaker,” she said. 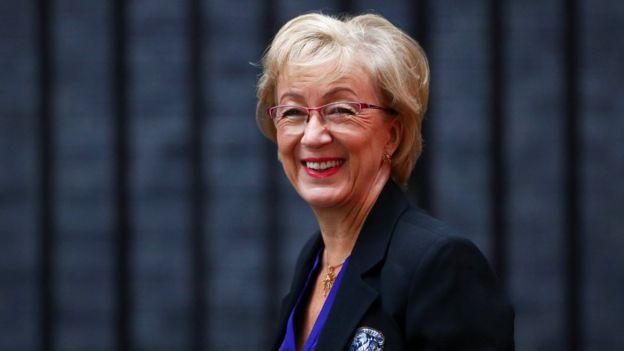 Ms. Leadsom clashed with the Speaker repeatedly as Leader of the Commons

It would not be the first challenge Mr. Bercow has faced in his constituency since he became Speaker in 2009.

Brexit Party leader Nigel Farage, then standing as a candidate for UKIP, lost to Mr. Bercow in Buckingham in the 2010 election.

Ms. Leadsom repeatedly clashed with Mr. Bercow in the two years when she was Leader of the Commons, a role which made her responsible for arranging government business in Parliament.

In May last year, the Speaker apologised after claims he called Ms. Leadsom a “stupid woman”.

In 2018 Mr. Bercow let it be known he would stand down this summer – his tenth in office.

But earlier this month he told an audience at the Edinburgh festival fringe he would “fight with every breath in my body” to stop the government forcing through a no-deal Brexit by by-passing Parliament.

Last year, Mr. Bercow was among MPs accused of bullying by staff in the House of Commons, although he denied the allegations.