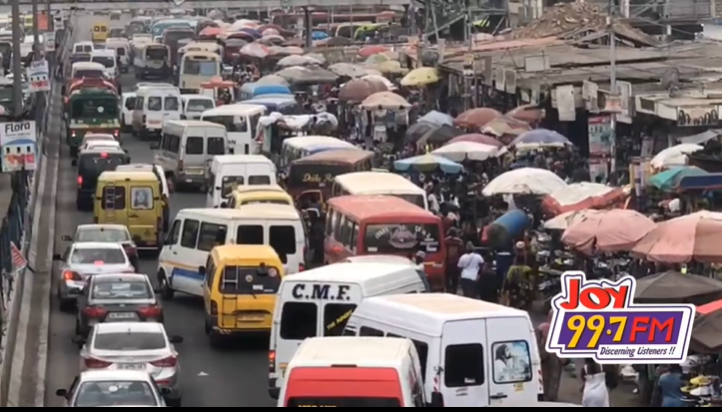 On Thursday, JoyNews’ Super Morning Show team visited the Takoradi station at Kaneshie which has become the hub of indiscipline.

The traffic on that stretch of highway running from Mallam junction through to the Abossey Okai roundabout is nothing to write home about.

It was clear to see that the traders, who have set up stalls, have completely taken over one lane.

Also, the trotro drivers who are refusing to stop at designated bus stops and have commanded one lane as a ‘park and load’ zone have also decided to load in moving vehicles in the middle lane.

In all, the three lanes have been captured by the traders and drivers.

The solution may seem as easy as engaging the police to restore order, but the team discovered that the traders are paying the assembly for the space and hence it becomes difficult to evict them.

Some of the traders explained that they pay the assembly ¢1 each day to occupy their side of the highway. They even argued that they are not taking too much space. The general consensus though was that the road is for all of us so if “we have taken small it doesn’t matter”.

“The police come and sack us sometimes but we come back the next day, we are not going anywhere,” one of the traders said.

He said every attempt to get them to do the right thing starts a fight so they also take the middle of the road as their parking space.

However, the station porter said when the police are around there is law and order, but of course, “they cannot be there for 24 hours.”

In response to this, the district superintendent of Kaneshie MTTD said it’s crucial that the assembly collaborates and works with the police to enforce the law without fear or favour.