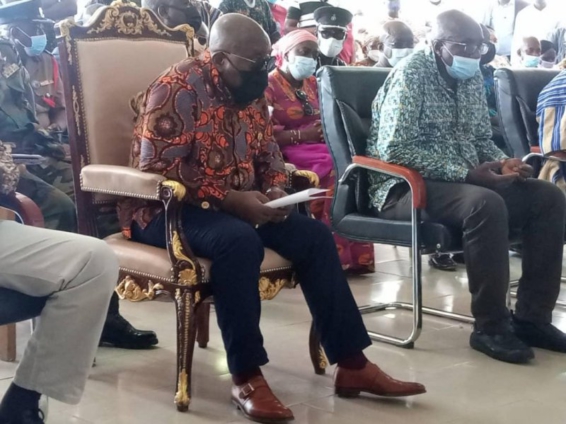 President Akufo-Addo has appealed to traditional rulers in the Upper West Region to assist the security forces to cut down the smuggling of fertilizers out of the country.

He said it was not right that agricultural inputs, which had been financed by the Ghanaian taxpayer, should find their way to other countries largely because of the greed of a few criminal elements in society.

President Akufo-Addo made the appeal when he called on the Wa Naa Fuseini Seidu Pelpuo IV, the Overlord of the Wala Traditional Area, as part of his two-day tour of the Upper West Region.

He said such practice has led to shortages and appealed to Wa Naa Pelpuo and his elders to assist the security agencies to bring the smuggling to an end.

President Akufo-Addo assured the people that he would direct the Minister of Agriculture to address the shortage of fertilizers so that farmers would have access to the input for production.

He said he was glad that the autonomy of the Simon Diedong Dombo University of Business and Integrated Development Studies (SDD-UBIDS) and the Dr Hilla Limann Technical University had now been established.

He added that he would discuss with the Regional Minister to see how they could facilitate a nominee of Wa Naa into the Governing Councils of the two institutions as he requested.

Responding to Wa Naa’s request for support for the palace school, the President said the request would be considered under the Northern Development Authority (NDA). At the same time, they facilitate the provision of a bus and pickup for the school.

On the fencing of the Islamic Girls School in Wa, the President said he was disappointed that the matter was still pending after his promise saying, “I promise you again and this time around, it will be done”.

On roads, President Akufo-Addo noted that in his first term in office, a total of 1,200kms of roads were asphalted across the country, which he said was more than any government in the Fourth Republic.

He noted that his government had once again committed itself to do a total of 1,500kms in his second term and assured Wa Naa that his request for the dualization of the Wa town roads would be included in the package.

“I have taken note of your demand for the rehabilitation of the Wa Sports Stadium as well as the completion of the new market – both of them will be part of the programme for the region”, the President said.

President Akufo-Addo expressed his gratitude to the people for naming the Wa Youth Centre after Alhaji B. K. Adama, one of the stalwarts of the New Patriotic Party (NPP) in the region.
The President was accompanied by Mr Dominic Nitiwul, the Defence Minister, Mr Ambrose Dery, the Interior Minister and other government officials.