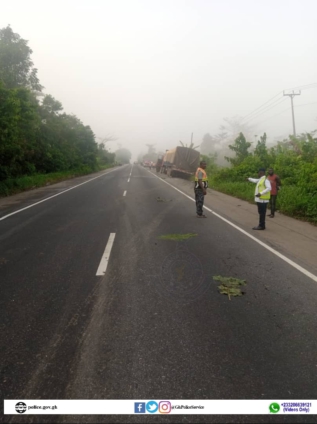 The Akim Aboabo road between Akim Asafo and Nsutam on the Accra-Kumasi Highway (N6) has been reopened for motorists after a few hours of closure.

On Monday morning, the road was closed following a fatal incident involving a Nissan Pickup and a loaded Daf articulated truck.

Due to wreckage in the middle of the road, personnel from the Kibi MTTD Accident Prevention Squad (APS) cordoned the area.

But in its update, the Police Service noted that the challenges have been resolved and this is due to the efforts of the Ghana National Fire Service Extrication Team, National Ambulance Service EMTs, and Road Safety Management Service Limited towing crew.

The Police, therefore, thanked the Services “for their timely and professional response in extricating, conveying, and recovering the vehicles off the road for further investigation.”

Meanwhile, the Police have entreated all drivers to at all times adhere to traffic and road safety regulations.

Drivers were urged to “always driving on the right, avoid overtaking in curves, on the crest, and when vehicles are approaching from the opposite direction to avoid head-on collision on our highways.”