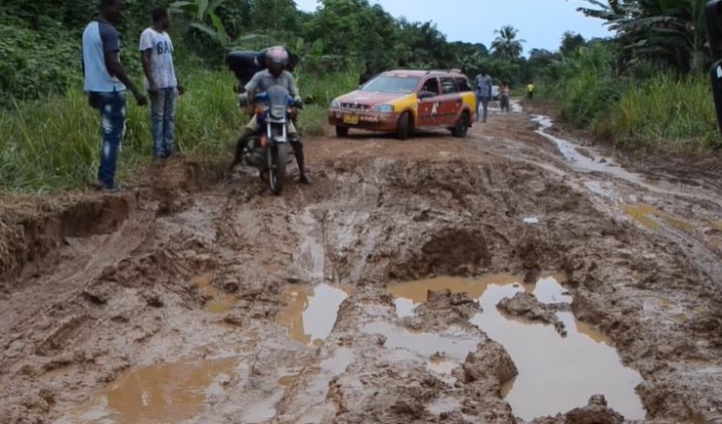 People are dying, children are becoming orphans and families are wailing because of the Sankor- Cape Three Points road, which has been left in ruins for several decades.

One would have thought that following the discovery of oil at Cape Three Points, there would be plans for the reconstruction and upgrading of major roads that link the communities to the rest of the country.

It is regrettable to note that – as of July 15, 2022 – all the chocolate-boxed promises of previous and current governments have not yet materialised and it appears politicians are only interested in winning the trust of residents in the area for votes – they forsake the people and concentrate on their luxurious lives until the next election is due.

I tell this story from a personal experience I had on the road few days ago during a visit to the Ahanta West Municipality of the Western Region. It is a story of a road that turns into river and mud at the slightest rainfall.

Left with no other options, commuters, motorists and residents are usually trapped in their ‘hideouts’ – their crime was to queue under the scorching sun to vote for a government or a political party or a representative that cares less about their frustrations and needs.

The least said, the better but truth stands always! The deplorable state of the road has worsened in recent times, causing damage to cars, leading to loss of lives and giving rise to criminal activities along the road. But what do you expect to happen when cars have to slow down unusually to avoid potholes? They, then, become targets for highwaymen.

Right from Sankor Junction (where the Mahama administration constructed one of the E-blocks) to Cape Three Points, no stretch is tarred and one cannot even talk about the road’s structural integrity because since those communities were discovered, there has not been any attempt to properly construct the road.

During the 2016 and 2020 elections, all political parties used the people’s desire to have the road fixed to push their campaigns. But since 2017, the promises are yet to be fulfilled.

In an earlier interview with JoyNews reporter, Samuel Kojo Brace, a new mother whose name was given as Fati said she nearly lost her life on the road while in labour.

“I went into labour around 10 pm and was transported in tricycle. I almost lost my life and the baby, and I bled profusely. Government must come to our aid because we vote as well, we are part of the country and vote as well and need our road fixed,” she bemoaned.

The alternative route for residents of Yakow to Komanfosua is the one that passes through Dixcove through Achonwa to the Old Town of Ezile, a town few metres away from Cape Three Points. Although that road is also in ruins, residents at the other side (Yakow-Komanfosua stretch) cannot use it because it would come with extra cost, and they may have to travel on motorbikes when they land at the Ezile New Town.

Sometimes, there are attempts to fill the potholes but such interventions leave the road in an even poorer state as the contractors grade the top layer and leave without replacing or making it better.

Just recently, a young man working on the stretch lost his life. His friends believe he would have been saved if they had been able to rush him to the Nana Hima Dekyi Hospital in Dixcove early enough.

“We were working on a bridge when he fainted. Due to the nature of the road, we couldn’t get him to the hospital early enough – we lost him,” Anthony is a friend of the deceased.

It appears residents may have to brace up for tougher times because there are no immediate plans to get the road fixed. On September, 6, 2021, chiefs and assembly members in the area met the Western Regional Minister, Dr Kwabena Okyere Darko-Mensah.

The purpose of the meeting was to draw the attention of the Minister to the state of the roads in the area. According to them, they had been dealing with “daily complaints from people about the roads, especially now that the rains have set in.”

A post on the Western Regional Coordinating Council (WRCC)’s website about the visit acknowledged that “the levels of deterioration have now completely cut off some communities for months now as they are inaccessible by road.”

The Minister is on record to have said that the road had been awarded to a contractor; however, it was just one of clichés.

Currently, the taxi cabs that work on the road do no operate after 6 pm. Additionally, they have increased the transport fares astronomically, making living in the areas very difficult for residents, especially strangers.

“The drivers are suffering; when they come, they don’t get the people. People walk from one community to another,” said Anthony.

Mr Ofori has been driving on the road for years. He recounted in an interaction with JoyNews how a young lady lost her life on the stretch.

“Four days ago, it happened just here. Because the gridlock created by the road, the driver carrying the patient could not get to the hospital on time. We lost her.”

There are more grievous consequences caused by the state of the road. At least, it is collapsing the economic and social activities in the communities along the road.

“We know that funding for Sankor to Cape Three Points roads did not happen but we will make it this time round. We will deliver, no matter where we need to find money. After all, we are in the ‘Year of Roads’ part two” – these are portions of a Promise made by President Akufo-Addo in September, 2021.

Residents say they are tired of pushing for what should have been their only benefit for getting you – Mr President, Regional Minister, Ahanta West MP and MCE – into power.

They are left in extreme disappointment because all of you, including previous governments and leaders, have jilted and left them to their sorrowing fate! I guess none of you would have what I term the ‘testicular fortitude’ to step a foot in those communities to campaign.

Some of the same people who are now bearing the brunt of this are to blame. They follow their stomachs, empty promises and money to make wrong decisions during elections…I wonder if there is any better option, though.

It is interesting to say that during the dry season – when vehicles can move freely – there is too much dust, which is not good for the health of residents. On the other hand, when it rains, the road becomes terrible for use. What is left, then? Just a fix, and all these troubles would be solved.

The earlier an intervention comes, the better for the people of Ahanta West!