US President Donald Trump has announced tariffs on all goods coming from Mexico, demanding the country curb illegal immigration into the US.

In a tweet, Mr Trump said that from 10 June a 5% tariff would be imposed and would slowly rise “until the Illegal Immigration problem is remedied”.

Mr Trump declared a national emergency at the US-Mexico border in February.

He said it was necessary in order to tackle what he claims is a crisis at the US southern border.

The US president has long accused Mexico of not doing enough to stem the flow of people, and this is his latest attempt to put pressure on the neighbouring state.

Mr Seade said Mexico “must respond vigorously” if the tariffs were brought in.

“I propose deepening our dialogue, to look for other alternatives to the migration problem,” he wrote in a letter on Thursday.

On June 10th, the United States will impose a 5% Tariff on all goods coming into our Country from Mexico, until such time as illegal migrants coming through Mexico, and into our Country, STOP. The Tariff will gradually increase until the Illegal Immigration problem is remedied,..

During his election campaign and throughout his time in office, President Trump has sought funds to build a wall on the US-Mexico border.

He declared the national emergency at the border in an attempt to divert federal funds for a barrier wall, but a judge blocked his efforts in May.

The White House said on Thursday that the president would use the International Emergency Economic Powers Act to implement the new tariffs on Mexico.

The announcement came the same day that the White House told Congress it planned to pursue a new trade deal with Mexico and Canada.

What did Trump announce?

In a White House statement, Mr Trump said the tariffs would rise by 5% each month until October 1, when the rate would reach 25%.

The tariffs would stay at that level “unless and until Mexico substantially stops the illegal inflow of aliens coming through its territory”, he said.

“For years, Mexico has not treated us fairly – but we are now asserting our rights as a sovereign Nation,” the statement said. 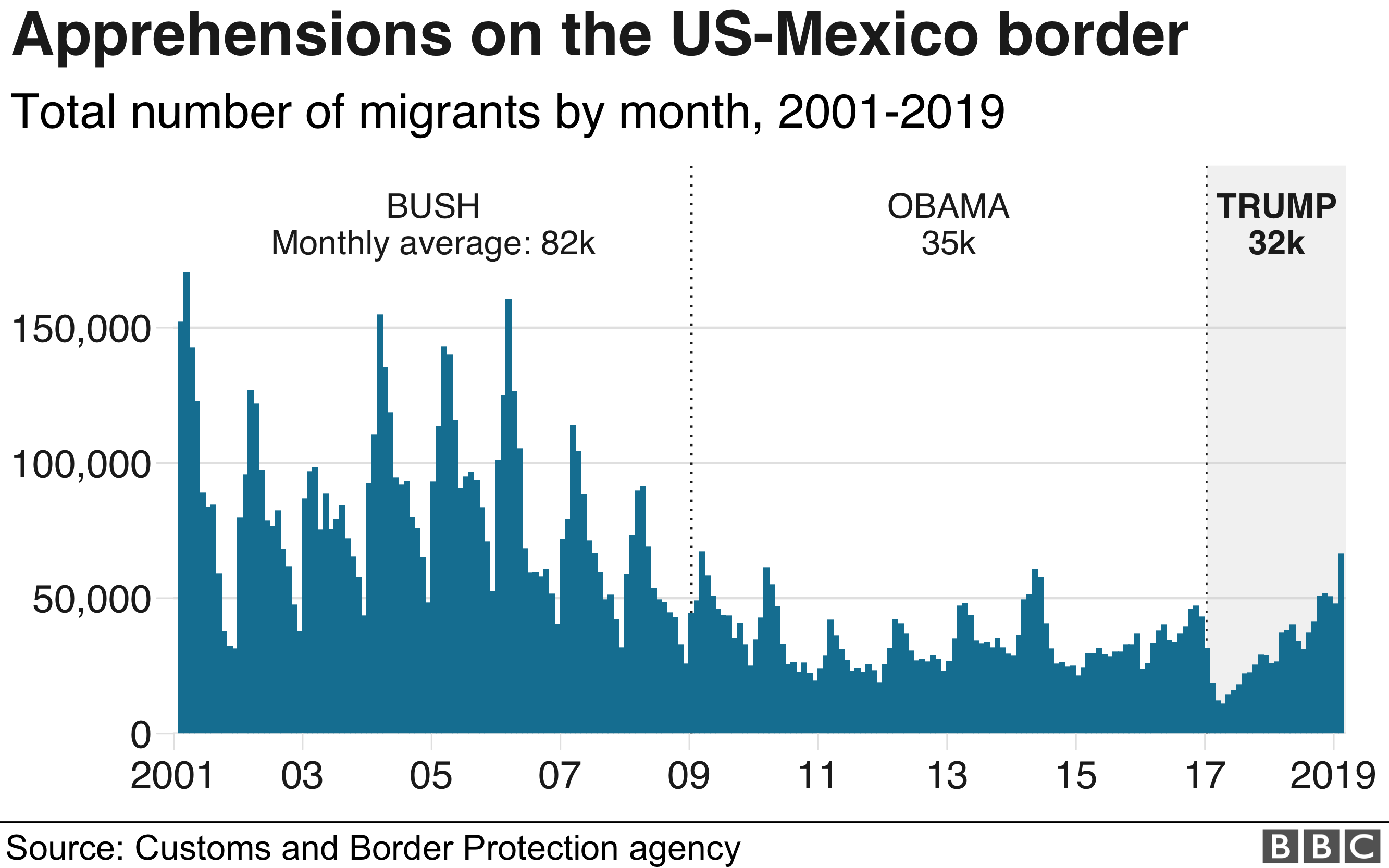 The president also took aim at his Democratic opponents, accusing them of a “total dereliction of duty” over border security.

The Democrat-controlled House of Representatives is taking legal action to halt the Trump administration’s efforts to build a border wall, saying it would be a waste of funds and would not stop illegal immigration.

Critics say border agents are taking a heavy-handed approach under the Trump administration to controlling migration at the US-Mexico border, pointing to the deaths of six migrant children in US custody since September.

What will the tariffs affect?

Mexico was the US’s second largest supplier of goods last year, with imports totalling $346.5bn (£275bn), according to the Office of the United States Trade Representative.

It is known for agricultural products like avocados and tequila, but the country is also a major manufacturing hub and home to many US companies.

The country produces hundreds of thousands of cars every month, and is also home to technology and aerospace companies. It is one of the G20 economies.

US firms Ford, General Motors, John Deere, IBM and Coca Cola all operate in Mexico, as well as thousands of other multinationals.

Janet Lewis, an analyst at Macquarie Securities, pointed out it would raise prices for manufacturers in ways which were not immediately obvious.

“The unknown factor is the impact on suppliers, as components can move back and forth between Mexico, the United States and Canada up to 20 times before they make their way into assembled cars,” she told Reuters news agency.

The effects are already being felt. Share prices in companies like Toyota and Nissan fell around 3%, while Mazda fell 7%, Reuters reported. The Japanese companies all have manufacturing plants in Mexico.

The president’s statement comes amid a trade war with China.

After complaining for years about the US trade deficit with China, Mr Trump imposed tariffs on hundreds of billions of dollars worth of goods coming from the country. 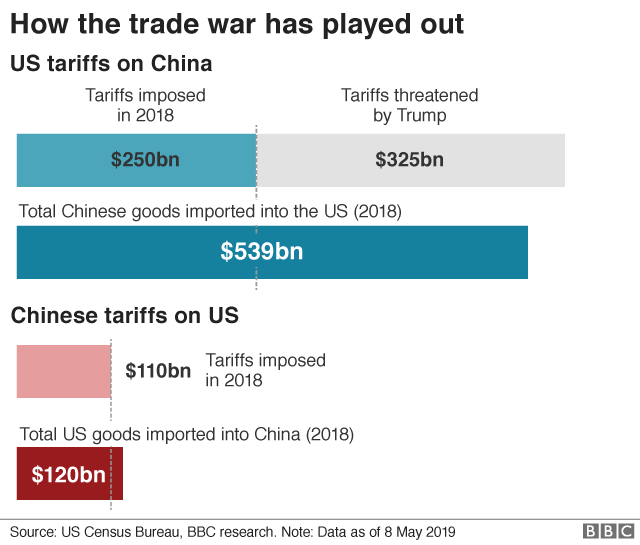