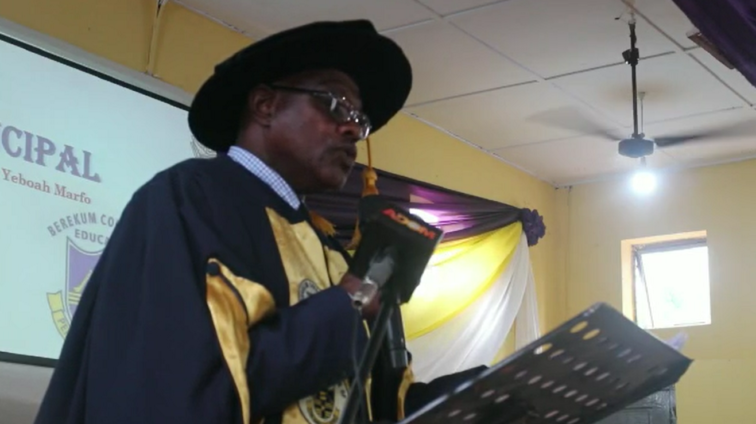 The Principal of the Berekum College of Education, Prince Yeboah Marfo, has expressed worry about the increasing rate of tutors leaving Colleges of Education to the Universities.

He said the exodus of the tutors is due to the slow pace of the implementation of conditions of service and staff promotions for tutors in the college of education in Ghana.

The Principal was addressing a graduation ceremony of the 2019 and 2020 year groups at the college in Berekum in the Bono Region under the theme, “Teacher Education Reforms in Ghana, Prospects and Challenges”.

1,079 students from the Berekum College of Education graduated with Diploma in basic education. The 2021 graduates would be awarded a Degree in Basic Education.

The Principal of the Berekum College of Education, Prince Yeboah Marfo, said the colleges of Education are unable to replace the tutors they continue to lose to the Universities.

“The on availability of financial clearance to replace these staff also overburden the few staff we have retained in the colleges”, he said.

He appealed to the Ministries of Education and Finance to increase the financial clearance allocations to the colleges to help them replace lost ones.

The Principal also said they have facilities, classrooms, and hostels for only two-year groups and therefore called on the government to take urgent steps to expand infrastructure in the Colleges of Education to accommodate the increasing number of trainees as a result of the Educational Reforms.

Prince Yeboah Marfo commended the Berekum College Education for topping the number of first classes among the Colleges of Education in Ghana.

He also appealed to the government to adjust the feeding component of allowances and allowances in general for students to reduce the huge burden on the management of colleges of education.

The Overall best graduating student in the College, Elvis Nana Kusi, also appealed to the Ministry of Education to give teachers who graduated before the introduction of degree programs at the colleges of education some time to pursue it since the Educational Reforms was introduced at the time they were completing College.

He said the time they were offered the opportunity to be awarded a degree in education after a top-up was short, and most of them had little enlightenment to pursue it with confidence.

Prof Sarah Darkwa, who represented the Vice-Chancellor of the University of Cape Coast, admonished the graduates to accept postings to rural areas. She said Taxpayers all over the country contributed to cater for them while at school, hence, they must reciprocate that by showing dedication and commitment in teaching the future leaders.

The Omanhene of Berekum Traditional Area, Dasebre Dr Amankona Deiwuo II, also advised the newly graduated teachers to put into practice what they have acquired from the college.

DISCLAIMER: The Views, Comments, Opinions, Contributions and Statements made by Readers and Contributors on this platform do not necessarily represent the views or policy of Multimedia Group Limited.
Tags:
Berekum College of Education
Exodus
Tutors