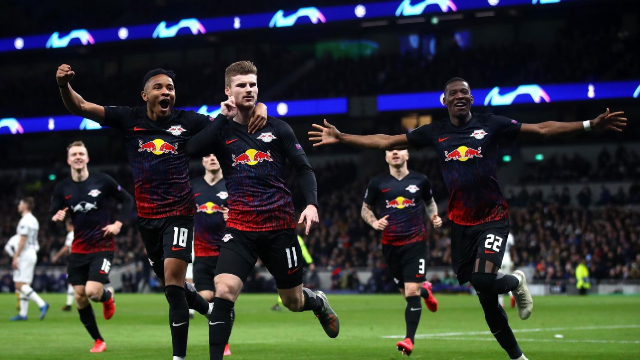 A second-half penalty from Timo Werner was enough to give RB Leipzig a 1-0 lead over Tottenham Hotspur ahead of their second-leg meeting in the last 16 of the Champions League.

The visitors started quickly but they were denied on a number of occasions by Spurs keeper Hugo Lloris.

The breakthrough came after the break when a clumsy challenge from Ben Davies on Konrad Laimer led to the penalty, which Werner duly converted.

However, Spurs pushed hard in the closing stages of the game and will be frustrated they were unable to find the leveller.

The return is in Germany on March 10.

Also on the night,  Atalanta continued their dream debut Champions League campaign on Wednesday with a 4-1 win over Valencia in an entertaining last-16 first leg meeting at San Siro.

Gian Piero Gasperini’s Serie A side raced into a two-goal lead by halftime with goals from Hans Hateboer and Josip Ilicic, while Valencia were denied by the post.

Remo Freuler’s curling strike and a second goal for Hateboer looked to have ended the tie as a contest, but substitute Denis Cheryshev gave the Spanish visitors a faint glimmer of hope with an away goal.

Two-time runners-up Valencia will host the Serie A side at the Mestalla Stadium in the return leg on March 10.

DISCLAIMER: The Views, Comments, Opinions, Contributions and Statements made by Readers and Contributors on this platform do not necessarily represent the views or policy of Multimedia Group Limited.
Tags:
Leipzig
Spurs
UCL