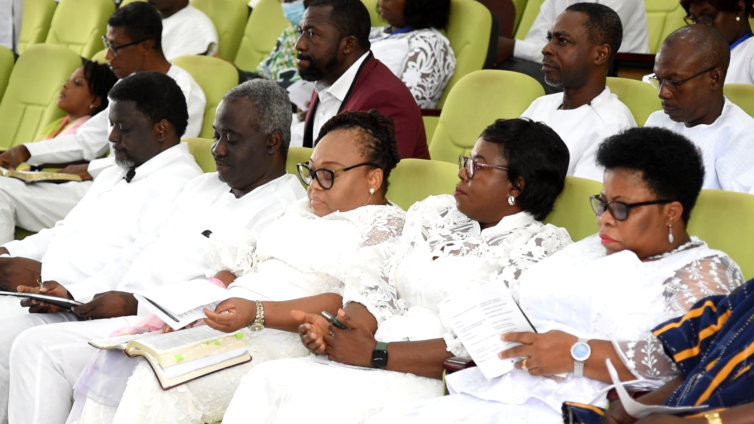 The University of Health and Allied Sciences in the Volta Region held its 10-anniversary thanksgiving service over the weekend on the Sokode campus.

The service also marked the end of the tenure of the Vice Chancellor, Prof. John Owusu Gyapong and Registrar, Dr. Cynthia Sena Kpeglo,

UHAS took off in 2012 with 154 students and a few staff members at the incubator site on the premises of the Ho Teaching Hospital.

After 10 years of establishment, it now has a student population of over 5,000, 900 staff members and witnessed some infrastructure development.

The outgoing Vice Chancellor, Prof. John Owusu Gyapong, attributed the development of UHAS to God but acknowledged that the University should have seen more infrastructure development during his tenure.

He, however, hopes his successor would continue to develop the University to the desired status.

Prof. Gyapong used the occasion to apologize to anybody who may have been hurt due to certain decisions and actions of his.

“In the course of my administration, there might have been a few tough decisions that we have to make and we meant no harm… unfortunately, it caused some harm. So for those who were harmed, we apologize but we didn’t mean any harm”, he said.

The Guest Preacher, the Head Pastor of the Perez International Church, Archbishop Charles Agyinasare, anchored his sermon on appreciating God at all times.

He urged Christians to soldier on even in times of struggles since the Lord is preparing them for a better future.

“There are times God will allow a mess to be created around you and without that mess you never would have had a message so he wants you to have a message.

There are times he would allow you to go through tests because he wants to give you a testimony, he makes you go through the trials so that he can give you some triumph.

They hand over the leadership baton to the incoming Vice Chancellor, Prof. Lydia Aziato, and the incoming Registrar, Yaa Amankwaa Opuni.