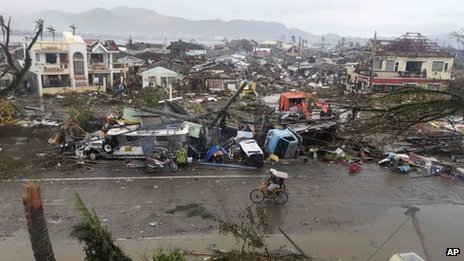 The UN has launched an appeal for $301m (£190m) to help relief efforts in typhoon-hit areas of the Philippines.

At least 10,000 people are feared to have been killed by Typhoon Haiyan, which struck the central Philippines on Friday.

The UN says more than 11 million people are believed to have been affected by the storm and some 673,000 displaced.

The BBC's Jonathan Head, in the badly-hit city of Tacloban on Leyte island, says the main road from the airport to the city is clogged with refugees and debris, and that residents are becoming angry at the lack of progress and increasing breakdown in security.

Valerie Amos, the UN's Under-Secretary-General for Humanitarian Affairs and Emergency Relief, has arrived in Manila to head the aid operation.

She told the BBC the storm had been far worse than expected, and that people in the affected regions were "absolutely desperate".

"They need food, they need water, they need shelter. People need to be protected," she said.

Helicopters were also in urgent need to help with assessing the damage, she said.

Baroness Amos told reporters the UN would work alongside the Philippine government, and that efforts would focus on "food, health, sanitation, shelter, debris removal and also protection of the most vulnerable".

"I very much hope our donors will be generous," she said.

The BBC's Imogen Foulkes, at the UN in Geneva, says the operation will be one of the most challenging the body has ever mounted.

Survivors are scattered across several of the 7,000 islands which make up the Philippines, says our correspondent, and many areas have not yet been reached, so the figures of those in need – and the estimated death toll of 10,000 – could rise.

The UN had already released $25m to address the immediate needs of survivors. Secretary General Ban Ki-moon described the situation as "heartbreaking".

In a statement, he said the two worst affected provinces, Leyte and Samar, had suffered massive destruction and loss of life.

He authorised the release of emergency relief funds and deployed troops to affected areas.

The National Disaster Risk Reduction and Management Council (NDRRMC) has put the official death toll at 1,774, as of early Tuesday morning, with 2,487 wounded and 82 people listed as missing.

Aid agencies have warned that the security situation is worsening – our correspondent said food warehouses and grocery shops had been ransacked, and that people are starting to fear for their safety.

There were also reports that an aid convoy travelling to Tacloban was attacked and two of the assailants shot dead by troops.

Bodies of typhoon victims are lying in the streets or buried under rubble. Some have been buried in mass graves.

Tacloban airport has been severely damaged, meaning aid planes were not able to land for some time. Large crowds have gathered at the airport hoping to be evacuated, but so far only a small number of people have been able to board planes.

One woman hoping to be flown out said she had had to leave the body of her grandson at a temporary morgue in a hotel. Her son and his wife also died.

"I asked the mortuary to give my son and his wife proper coffins, but they told me their staff had not reported for work and that some of them were probably dead as well," Maria Adelfa Jomerez told the AFP news agency.

"There are no vehicles to transport them to the cemetery anyway. I would prefer that they not be buried in a mass grave, but I cannot do anything about that."

Another woman, Jemalyn Lamberto, told AFP: "We were told to queue and not leave our positions. But when a plane arrived, it was every man for himself."

"It is impossible to stay here in Tacloban. Everything is ruined. The dead are starting to stink. There is nothing to eat," she said.

A spokesman for President Aquino said Tacloban airport and a bridge to the Leyte island were open, and aid was gradually going in.

The US is sending its aircraft carrier USS George Washington and other navy ships to help with the relief work. The UK's Royal Navy Destroyer HMS Daring is also making its way from Singapore.

Other countries have also pledged millions of dollars in assistance. Japan is providing $10m and Australia $9m in humanitarian aid, while New Zealand has pledged over $1m.

Haiyan – named "Yolanda" by Philippine authorities – struck the coastal provinces of Leyte and Samar on Friday. It was one of the most powerful storms on record to make landfall.

Authorities had evacuated hundreds of thousands of people before the typhoon arrived, but many evacuation centres – schools, churches and government buildings – proved unable to withstand the winds and storm surges.

The typhoon then headed west, sweeping through six central Philippine islands and into Vietnam, where state media said at least 13 people had died.

At least six were also reported killed in southern China, after Haiyan tore through Hainan province and the Guangxi Zhuang autonomous region over the weekend, state media reports.

In the UK, the Disaster Emergency Committee (DEC) group of 14 charities launched its own appeal on Tuesday.

DEC chairman Salah Saeed compared the destruction in the city of Tacloban to that seen after the devastating tsunami of 2004.

"There is currently no food, water or electricity. We can only imagine how much worse the situation will be for families living in towns and remote villages," he said.