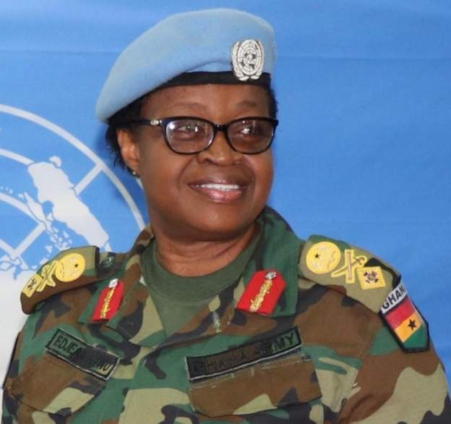 The UN a statement issued on Tuesday, stated that the late Brig General “made history in peacekeeping as the first female Deputy Force Commander in the United Nations Mission for the Referendum in Western Sahara (MINURSO).”

The statement from the UN comes after the late Brig-Gen was reported to have passed on at the 37 Military Hospital on Monday after a short illness.

According to António Guterres the late pioneer will be remembered in history for “her distinguished service in these missions, as well as her tireless work to promote inclusiveness and increase the number of women in the peacekeeping operations where she served.”

“She also served in United Nations peacekeeping operations in Lebanon, Liberia and the Democratic Republic of Congo,” the statement added.

The Secretary-General offered his heart condolences to her family as well as “the people and the Government of the Republic of Ghana.”

She was the first female to attain the title general in the Ghana Army.

Constance Emefa Edjeani-Afenu was promoted to the rank of Brigadier-General, the highest position ever occupied by a female in the Armed Forces, on March 7, 2016.

On April 25, 1980, General Constance Emefa Edjeani-Afenu was commissioned into the Ghana Armed Forces as a Second Lieutenant.

After completing her 18 months of regular training at the Ghana Military Academy, she served as a Platoon Commander at the 2nd Battalion of Infantry in 1980 for her regimental training.

She was subsequently posted as Platoon Commander and Adjutant to the 3rd Border Guards Battalion from 1981 to 1982.

In all these positions, she was the first female in the Armed Forces to occupy them.

In 2013 she became the first woman to be appointed Deputy Military Adviser (DMILAD) at the Permanent Mission of Ghana to the UN, New York, till 2016.

Whilst serving as DMILAD, she was promoted in March 2016 to the rank of Brigadier-General, becoming the first female to be ever promoted as a General in the Ghana Armed Forces.

She also served as the Ghana Armed Forces Representative to the Controller and Accountant General’s Department.

DISCLAIMER: The Views, Comments, Opinions, Contributions and Statements made by Readers and Contributors on this platform do not necessarily represent the views or policy of Multimedia Group Limited.
Tags:
Brigadier General Constance Emefa Edjeani-Afenu
True pioneer
United Nations