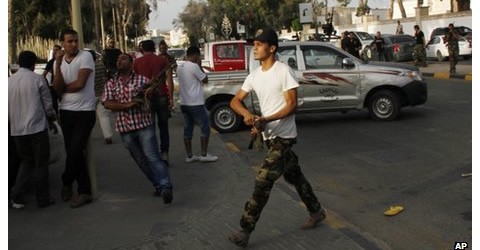 Libya’s General National Congress is to try to convene to vote on a new cabinet, a day after it was disrupted by protests.

About 100 protesters unhappy at the make-up of the proposed cabinet broke into the building on Tuesday.

The protesters reportedly said some of the proposed ministers had links to ex-leader Col Muammar Gaddafi.

Despite largely peaceful elections in July, Libya’s transition continues to be affected by instability.

“Let it be known to all Libyans and to the whole world in what conditions we are working,” interim leader Mohammed Magarief said after the assembly was stormed.

Earlier this month the assembly elected a new Prime Minister, Ali Zidan, and asked him to propose a cabinet within two weeks.

The previous Prime Minister, Mustafa Abu Shagur, was dismissed after failing to form a government.

Mr Zidan’s list includes a mixture of liberal figures and Islamists. The two biggest blocs in the assembly are the Alliance of National Forces, led by liberal former Prime Minister Mahmoud Jibril, and the Muslim Brotherhood’s Justice and Construction Party.

Mr Zidan said he had tried to strike a balance between Libya’s different regions in making the appointments.

According to his list, the defence and interior ministries would be headed by ministers from the eastern city of Benghazi, considered to be the cradle of last year’s revolution that ended Col Gaddafi’s rule.

Two women are also among the ministers proposed by Mr Zidan.

Last week, Libyan authorities said that pro-government forces had captured the town of Bani Walid, one of Col Gaddafi’s former strongholds, from what they said were Gaddafi loyalists.

However, confusion arose on Monday over the situation in Bani Walid, with interim Defence Minister Osama al-Juwali saying that the militias who had taken over the town were not under government control.

Reining in the different militia and trying to integrate them into a single national army will be one of the biggest challenges for any new government, analysts say.