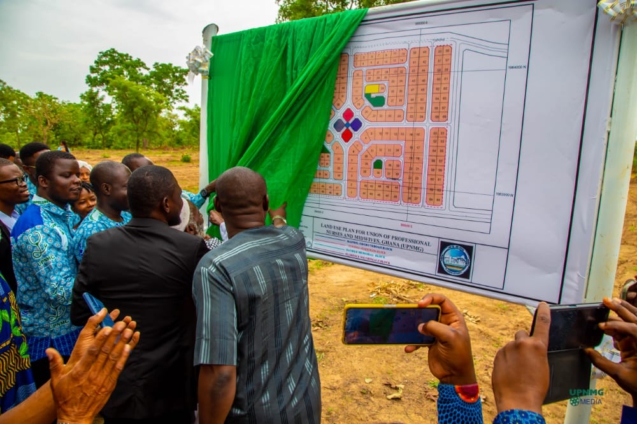 The Union of Professional Nurses and Midwives, Ghana (UPNMG) has launched a flagship policy dubbed; The UPNMG Land Policy

The Policy seeks to relieve Union members the hustle of scouting for land, which frequently results in them falling into the hands of unscrupulous people posing as agents.

Speaking at the launch of the policy at Sanchiga, the Upper West Regional Health Director, Dr Damien Punguyire urged the Union’s members to take advantage of UPNMG’s Land Policy to enable them put up homes during their active working years.

“As a young worker, the best thing is to acquire a plot of land and then develop it gradually so that by the time you reach 40-45, at least, you’ll have your decent place.

“You don’t wait to use your retirement benefits to start looking for accommodation. I want to once again encourage all of you to take advantage of this offer and get a plot of land,” he advised.

Dr. Damien Punguyire also urged the Union’s leadership ensure that proper systems are implemented in place to ensure that the Union stands the test of time.

On his part, the UPNMG President, Maxwell Oduro Yeboah expressed his excitement on the actualization of the policy.

While admitting that that the Union encountered some challenges, he noted that the quest to serve its members has always been a priority for the leadership.

“On this day, I am particularly excited that in less than three years of operation as a trade union, we have been able to accomplish so many things together.

“In 2017, when the foundation blocks of the UPNMG were being laid, few believed. But daring and motivated in the quest to save and serve the many Nurses and Midwives who were crying for welfare policies and better management of their resources, today we stand here to launch another policy,” he stated.

The UPNMG Land Policy is the latest initiatives introduced by the Union. The 50 Acre land is expected to have a police post, a clinic and other basic necessities that will make life comfortable for nurses and midwives

Other policies include; The UPNMG Loan Scheme, which runs at an interest rate of 11%. The UPNMG Mart/UPNMG Hire Purchase Scheme, instituted in order for members to have access to house hold items. The UPNMG Insurance, via a partnership with Enterprise Life Insurance.

DISCLAIMER: The Views, Comments, Opinions, Contributions and Statements made by Readers and Contributors on this platform do not necessarily represent the views or policy of Multimedia Group Limited.
Tags:
Union of Professional Nurses and Midwives Ghana
UPNMG Land Policy