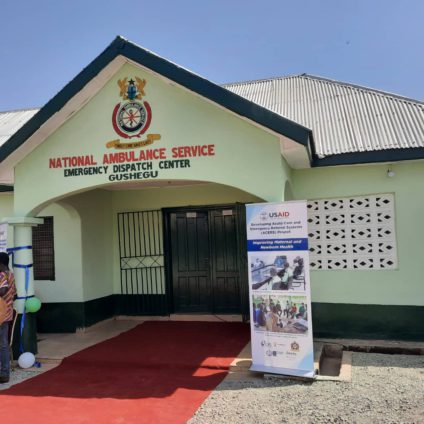 The US Ambassador to Ghana, Stephanie S. Sullivan has commissioned an Emergency Dispatch Center in the Gushegu Municipality of the Northern Region.

The referral center, the first of its kind in Ghana, is to eliminate the delays in the referral process.

The center will coordinate emergency cases directly from the municipality instead of calls to the headquarters in Accra or the Northern Region center for action.

The center is equipped with a digitalized operation room to receive emergency calls from health facilities across the municipality. It also has two tricycle ambulances modified to ensure the comfort of the patient as well as survive the harsh terrain.

Speaking at the commissioning, Country Representative of CRS Daniel Mumuni said 2,744 emergency cases have been coordinated averting negative outcomes including deaths under the ACERS project.

He said the project was designed to address three key areas; delay in making a timely decision to seek health care, delay in reaching the point of care and delay in receiving quality health care.

The country representative said 84 pregnancy schools have been established under the project with sessions facilitated by community volunteers working in coordination with community health officers.

He said under the quality of emergency obstetric care CRS has supported capacity building of 185 staff and 542 community-based agents to support the delivery of maternal and newborn services.

The US Ambassador to Ghana Stephanie S. Sullivan said the US has provided Ghana with more than 39 million dollars in support of public health institutions and for critical testing and medical supply.

She said Ghana has come a long way in providing health care for pregnant women and newborn. She said in 2019 the US and the government of Ghana launched the ACERS project together with the Ghana Health Service, the ambulance service, district assemblies and the communities to implement new approaches to improve emergency referrals and safe lives.

Madam Stephanie Sullivan said in the past pregnant women have had to be carried on either bicycles, a motorcycle or physically carried by community members to health centers.

She said with the ACERS project, 58 percent of pregnant women are now able to recognise the three most common pregnancy danger signs.

The Chief Executive of the Ghana Ambulance Service, Professor Ahmed Nuhu Zakaria said the services of emergency ambulances have always centered in major cities to the detriment of rural areas.

He said it is therefore a relief for the ACERS project to realize this dream for the rural folks with the provision of this emergency dispatch center. Professor Zakaria said it would taken Ghana several year if not a decade to reach the point where there will be a rural emergency service but for the support from USAID CRS and other stakeholders.

He said the referral center is a success therefore he hopes that it is replicated in other districts of the country.

Professor Zakaria said beyond tacking maternal and neonatal deaths the emergency dispatch center would improve upon the response and the linkages between the rural, district and regional response units.

He appealed for support to enable them to build a database system.