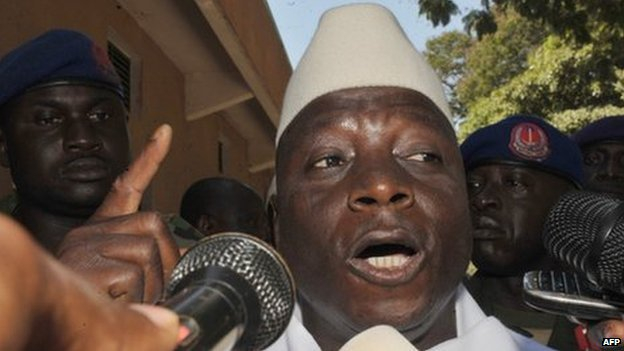 Two men have been charged in the US with attempting to overthrow The Gambia's President Yahya Jammeh, the justice department has said.

The defendants, who are of Gambian origin, are accused of conspiring against a friendly nation and conspiring to possess firearms.

Gambian authorities said they had thwarted a coup attempt on 30 December.

Mr Jammeh seized power in the tiny West African nation in 1994 and has been accused of authoritarianism.

He was abroad when gunfire broke out near the presidential palace in the capital, Banjul, on 30 December.

The president later returned home and accused dissidents based in the US, UK and Germany of being behind the attack.

Between 10 and 12 people had entered The Gambia to overthrow Mr Jammeh, "with the expectation that others in the country would join and assist them", the US justice department said in a statement.

"These defendants stand accused of conspiring to carry out the violent overthrow of a foreign government, in violation of US law," Attorney General Eric Holder said in a statement.

"The United States is committed to holding them fully responsible for their actions."

'Plotting in the woods'

Mr Njie, a Texas businessman, was in charge of the alleged conspiracy and would have been appointed interim leader of The Gambia had the coup attempt succeeded, according to documents filed in court.

Weapons, including M4 semi-automatic rifles and other military equipment, were last year shipped to The Gambia for use in the attempted coup, US officials allege.

The plotters met in the woods near the presidential palace on 30 December before splitting into two teams, the justice department said.

"Njie was not present at that meeting, instead waiting in a safe place until the assault teams took control of the facility. However, when one of the assault teams approached the State House and fired a shot into the air, the team began taking heavy fire from the guard towers," it said.

"Although numerous conspirators on the assault teams were killed or injured during the failed attempt to take control of the government building, Faal was able to flee the scene and he ultimately returned to the US. Njie also returned to the US." 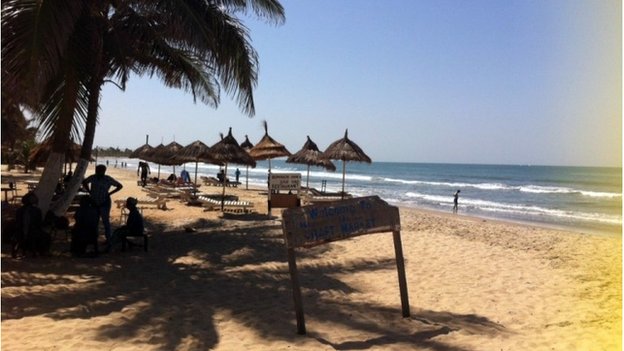 The Gambia's pro-opposition Freedom newspaper reported last week that at least four of the coup-plotters had been killed, including Lamin Sanneh, a former head of the presidential guard who was living in exile in the US, but this has not been confirmed.

Numerous officials and opposition leaders have fled the country, saying they fear for their lives after the military conducted house-to-house raids.

Mr Jammeh has won several elections since seizing power but critics say they were neither free nor fair.

Apart from a short Atlantic coast, The Gambia is entirely surrounded by Senegal.

Its main foreign currency earners are tourism and peanut exports.