US election 2020: Three election headlines you could wake up to 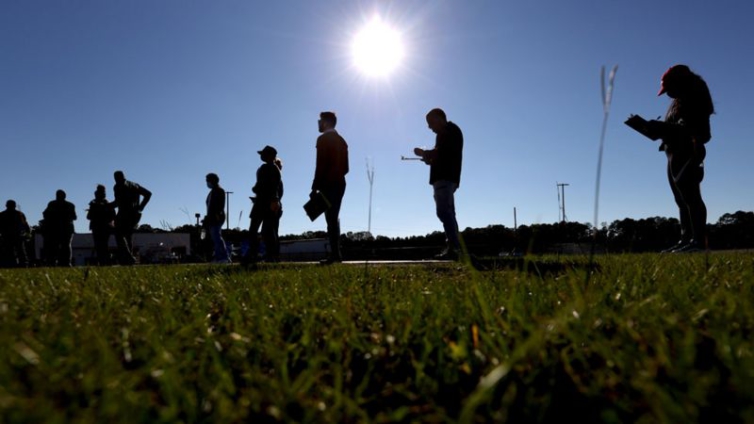 So we’ve finally got here. That bit in an Olympic marathon where the runners enter the stadium for the last 400 meters on the track, straining aching muscles and tired bodies to sprint to the finish.

It’s been an extraordinary, sometimes unsettling, certainly unimaginable (who had global pandemic on their bingo card?) election campaign and trying to figure out what happens next it is all crystal clear to me.

There are three possible scenarios, and I wouldn’t be in the least bit surprised if any of them came to pass (actually there’s a fourth scenario, but I’ll get to that later).

Having reported on this president’s effort to buy Greenland, and when the Danes refused to sell to the former property developer, watched as the president cancelled a state visit in revenge; having learnt that he paid off a porn star just before the last election; having been in Helsinki and listened to him saying he preferred to believe Russian President Vladimir Putin who was standing next to him than he did his intelligence agencies; having seen him investigated, impeached and then cleared; having watched him drive past me outside the Walter Reed Hospital when he was infectious with coronavirus; having been called “another beauty”, just for saying I was from the BBC, I really have come to realise that anything can happen, and frequently does.

So let’s come to the three possible scenarios.

The first is that the polls are right and Joe Biden gains a comfortable victory on Tuesday night.

For all the turmoil and tumult of this campaign – and very unlike four years ago – the national polls and crucial state polls have been unbelievably consistent. Nothing has happened. Nothing has moved. Biden has enjoyed a big lead nationally, a smaller one in the sunbelt states of Florida, Arizona and North Carolina, and a similar margin in the northern industrial ones – Wisconsin, Michigan and Pennsylvania

If you go to the FiveThirtyEight blog, where they keep a running average of all the mainstream polls, they say there has been a tightening in the race of 0.1%.

When we report polls we normally say there is a 3% +/- margin of error. Only a 0.1% change over several weeks is incalculable. So if on Tuesday night this turns out to be the result, I won’t be in the least bit surprised.

Which brings me to the second possible outcome. It is that like 2016 (although I could bore on for some time about why this is not quite true) the polls are wrong and Donald Trump wins a second term. Key to his success is what happens in Pennsylvania and Florida.

No one believes polls showing Biden three or four points ahead in the Sunshine State – it is far tighter than that in Florida. And in 2020 Trump is doing far better with Latinos than he was in 2016.

Likewise Pennsylvania, where in the west of the state white working-class voters could be what pushes the president over the line.

In this Covid-restricted election, I’ve been to Florida, Ohio, Tennessee, Pennsylvania, North Carolina, Georgia and Virginia. And wherever you go, you find Trump supporters that don’t just like the 45th president – they adore him.

And the Trump campaign calculation is that just as in 2016 – when they brought many people out to vote who were “off the grid”, so beyond the pollsters’ radar screens – they will do the same again.

Also, I want to say a word about these rallies the president has been holding.

Democrats have piled in saying how irresponsible he is to bring thousands of people together when there is no social distancing in a pandemic. I don’t want to get into that argument. But you’d better believe there is smart calculation in doing this.

To attend these events you have to sign up online, there then follows a sophisticated data-mining operation to see whether you are on the electoral register – and if you’re not, they will sign you up. Thousands and thousands of people have been registered to vote as a result of this and in a tight election, removing that barrier to casting ballots might make all the difference.

The one other reason that a Trump victory would not surprise me in the least is that Joe Biden is hardly an inspiring campaigner.

If ever anyone represented an old guard, it is him. The aging process is cruel to everyone, but the president seems so much more vibrant and vigorous than Biden, even though they are only three years apart. It is not as if Biden is “hope” to borrow the Obama 2008 slogan. All he offers is “nope”, he’s not Donald Trump.

There is a surging “negative partisanship” which looks as though it might be a decisive factor in this election. It’s not that people want Biden, it’s that they’ve had enough of this noisy presidency which has seen America become so bitterly divided.

Which bring us to the third scenario. And it is the same as the second – the polls are wrong.

Except this time the polls are wrong in the opposite direction. And this is the possibility that not only does Biden win, he wins big; it is a blowout election, akin to Ronald Reagan’s victory over Jimmy Carter in 1980 Or George HW Bush’s victory over Michael Dukakis in 1988.

The president has seen in the final week of the campaign coronavirus cases surge to all-time highs, with hospitalisations rising, deaths ticking upwards to a thousand per day.

He’s also seen the stock market having its worst week since March – a barometer of economic health this president cares passionately about.

Unlike 2016, when Donald Trump had a very clear message to the American people – he wanted to build a wall, he wanted to keep Muslims out, he wanted to renegotiate trade deals, he wanted to bring back manufacturing – in 2020 he’s struggled to articulate what a second term would be about.

So if the “blowout” came to pass, Biden doesn’t only win the states I’ve listed in the first scenario, he takes Texas (Texas!), Ohio, Iowa, Georgia, possibly even South Carolina.

I mentioned at the outset there is – conceivably – a fourth scenario. And don’t ask me to go into the mechanics or the consequences, but… because of the way Nebraska splits its electoral college votes, it is conceivable that in the race for 270 electoral college votes – the magic number that secures you the presidency, you end up with Biden on 269 and Trump on 269.

And after billions of dollars spent, you end up in total gridlocked, legal quagmire, America divided hell.

It’s never happened in the modern era, and I say it is unlikely.

DISCLAIMER: The Views, Comments, Opinions, Contributions and Statements made by Readers and Contributors on this platform do not necessarily represent the views or policy of Multimedia Group Limited.
Tags:
Biden
Campaign tour
Trump
US election 2020