US embassy in Baghdad attacked by protesters

Protesters angered by recent US airstrikes targeting an Iranian-backed Iraqi militia have attacked the American embassy compound in Baghdad.

US troops fired tear gas to disperse a crowd that got into a reception area in the compound, which is in the capital’s heavily fortified Green Zone.

A guard post on the street nearby was also set alight.

US President Donald Trump blamed Iran for the attack, warning: “They will pay a very big price!”

“Iran will be held fully responsible for lives lost, or damage incurred, at any of our facilities,” he wrote in a tweet. “This is not a warning, it is a threat. Happy New Year!”

Mr Trump first accused Iran of “orchestrating” the attack some nine hours earlier. Iran denied any involvement, and condemned the “audacity” of the US for making the accusation.

At least 25 fighters died when the US bombed bases associated with the Kataib Hezbollah militia in western Iraq and eastern Syria on Sunday.

The US said it was retaliating for a rocket attack on an Iraqi military base in Kirkuk on Friday that killed an American civilian contractor.

Iraqi Prime Minister Adel Abdul Mahdi said the strikes had violated his country’s sovereignty, while Kataib Hezbollah leader Abu Mahdi al-Muhandis, warned that its response “would be very tough on the American forces in Iraq”.

What happened in Baghdad?

Tuesday’s protest took place after funerals were held in Baghdad for the militia fighters who were killed in the US strikes.

Thousands of mourners – including Abu Mahdi al-Muhandis and several other senior militia and paramilitary leaders – marched towards the Green Zone, where many Iraqi government offices and foreign embassies are located. 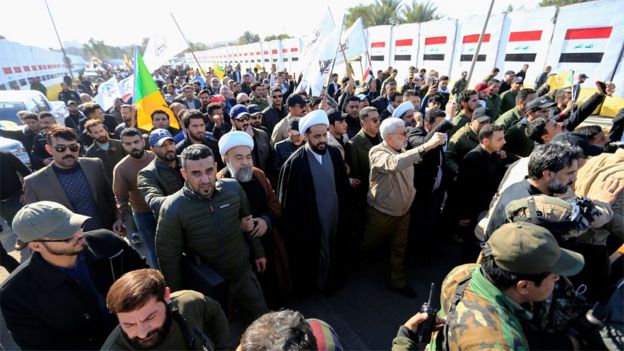 Image caption: Senior paramilitary and militia leaders were among the protesters

They were allowed by Iraqi security forces to enter the zone and gather on a street outside the US embassy compound.

“This embassy has been proved to be an embassy of plotting against Iraq,” said Qais al-Khazali, head of the Asaib Ahl al-Haq militia.

The situation later escalated when the compound’s wall was breached.

According to the Associated Press news agency, a gate was smashed open and dozens of people pushed about 5m (16ft) into a corridor leading to the main embassy building, before being forced to retreat by tear gas fired by US troops.

A US official told CBS News that the compound had not been breached but that protesters had scaled a wall with a ladder and get into a reception area outside it.

Iraqi soldiers and riot police were reportedly later deployed in the area and the protest died down as night fell.

Fifty people were treated for tear-gas inhalation at hospitals in Baghdad, a health ministry source told the BBC.

None of the embassy staff were evacuated, but they are now on lockdown, CBS reported. Ambassador Matthew Tueller was outside Iraq for a previously scheduled holiday and was reportedly returning to the embassy.

Hours after the protest began, Prime Minister Abdul Mahdi called on people to leave the area around the US embassy.

“Any attack on or harassment of embassies and foreign delegations are acts that will be firmly prevented by security forces and severely punished by the law,” he said.

President Trump tweeted: “Iran killed an American contractor, wounding many. We strongly responded, and always will. Now Iran is orchestrating an attack on the U.S. Embassy in Iraq. They will be held fully responsible. In addition, we expect Iraq to use its forces to protect the Embassy.”

There was no immediate response from the Iranian government.

Defence Secretary Mark Esper later said the US had used “appropriate force” to protect the embassy, adding: “We are sending additional forces to support our personnel.” He gave no details. 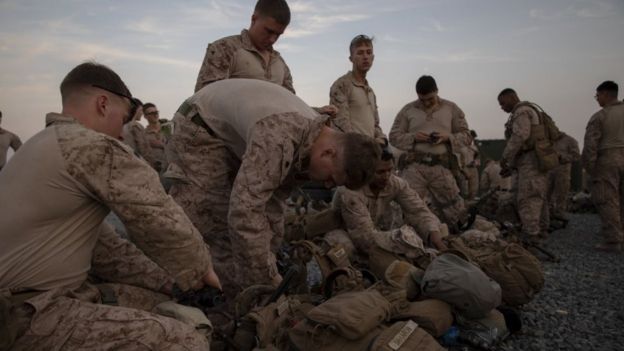 Image caption: US Marines in Kuwait packed their gear before being flown to Baghdad on a crisis response mission

Kataib Hezbollah meanwhile called for protest outside the embassy until it was closed and the ambassador was expelled from Iraq, news website Al-Sumaria said.

The US said the militia had carried out repeated attacks on Iraqi bases that host US-led coalition forces fighting the Islamic State (IS) group.

Since 2009, the US has designated Kataib Hezbollah as a terrorist organisation and listed Abu Mahdi al-Muhandis as a “global terrorist”.

The defence department said the militia had a “strong linkage” with Iran’s Quds Force, the overseas operations arm of the Islamic Revolution Guard Corps (IRGC), and had “repeatedly received lethal aid and other support from Iran”.