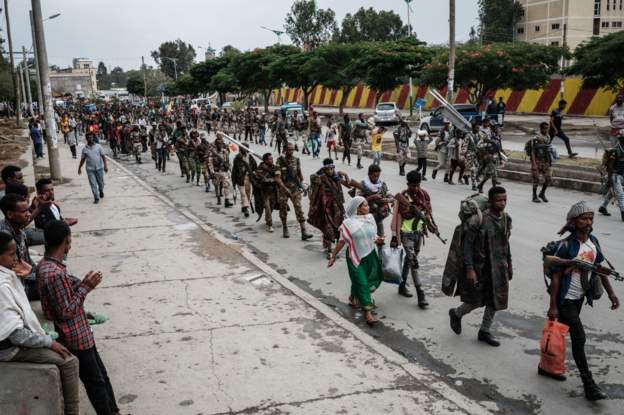 Tigray rebels have been advancing towards the capital

US Secretary of State Antony Blinken says he is hopeful that diplomacy will work to end the war in Ethiopia.

He said he had been in contact with African Union’s special envoy, former Nigerian President Olusegun Obasanjo, as well as the US regional envoy, Jeffrey Feltman.

“We are hopeful that, given the important work that president Obasanjo is engaged in – the efforts that we’re making and others are engaged in – that there is still a window to pull back and to move this to a better place,” he said on Wednesday.

Mr Blinken also said he had spoken to Ethiopian Foreign Minister Demeke Mekonnen and emphasised on the need to “seriously engage in negotiations on a cessation of hostilities without preconditions”.

He expressed concern that the words coming from both sides of the conflict risked inflaming inter-communal violence.

He hoped that negotiations for a ceasefire would allow humanitarian aid access and later “to negotiate a more durable political resolution”.

It follows Tigray rebels recent advance towards the capital.

The government has been asking residents of Addis Ababa to mobilise and protect their neighbourhoods.

DISCLAIMER: The Views, Comments, Opinions, Contributions and Statements made by Readers and Contributors on this platform do not necessarily represent the views or policy of Multimedia Group Limited.
Tags:
Anthony Blinken
Ethiopia
US Secretary of State