US Open 2021: Novak Djokovic will face Alexander Zverev in semi-final 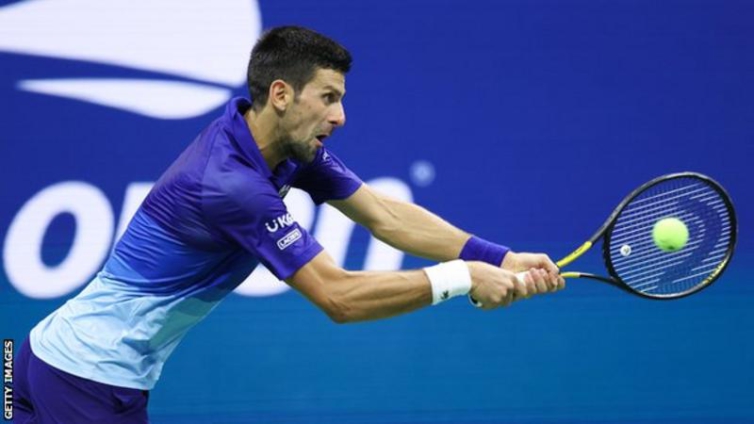 Novak Djokovic will continue his bid to win all four Grand Slams in the same year against Olympic champion Alexander Zverev in Friday’s US Open semi-final.

“I feel like I was the first player to beat [Djokovic] in a very big match this year,” Zverev said on court.

“I mean, it’s the biggest tournament in the world. It’s the Olympics. Winning there against the world number one, especially as I was down a set and a break, being kind of out of the match, then coming back, it was different than the other matches. The emotions were different.

The first of the US Open men’s semi-finals will begin at 20:00 BST on Friday, with the second scheduled to start four hours later.

Djokovic said of his semi-final opponent: “He’s in tremendous form, he’s been winning a lot. He has comfortably moved to the semi-finals here.

“I know his game well – we played in Tokyo. He’s one of the best players in the world, but the bigger the challenge the more glory in overcoming it.”

Djokovic, 34, is now just two wins away from adding the US Open title to those won at the Australian Open, French Open and Wimbledon earlier this year.

Serbia’s 20-time Grand Slam champion, who also beat Berrettini in the Wimbledon final, said after losing the first set against the Italian that he went on to produce “the best three sets I’ve played so far”.

Berrettini’s impressive serving helped him to a break in the first set, but he squandered three set points before Djokovic hit a forehand wide to lose the opener.

From there, the world number one produced just 11 unforced errors across the next three sets as he closed out the match in dominant style.

Should he reach and win Sunday’s final, Djokovic will be the first man to win all four majors in the same calendar year since Rod Laver in 1969.

There were extraordinary scenes on Arthur Ashe earlier on Wednesday when Harris showed his frustrations at the end of the first set tie-break, launching a drinks bottle across the court.

Its contents spilt and both players, along with the umpire and a number of ball kids, had to pick up towels to clean it up.

At one point, Zverev and Harris were chatting away while drying up the mess, before the South African poured water over the area to stop it from getting sticky.

He was not the only one to lose his cool – Zverev, while trailing 5-3 in the opening set, slammed his racquet into the ground after missing a forehand.

But the German was in fine serving form, even producing an ace on a second serve midway through the second set, and closed out the match in two hours and six minutes.