US Open: Rafael Nadal not sure when he will return after loss to Frances Tiafoe 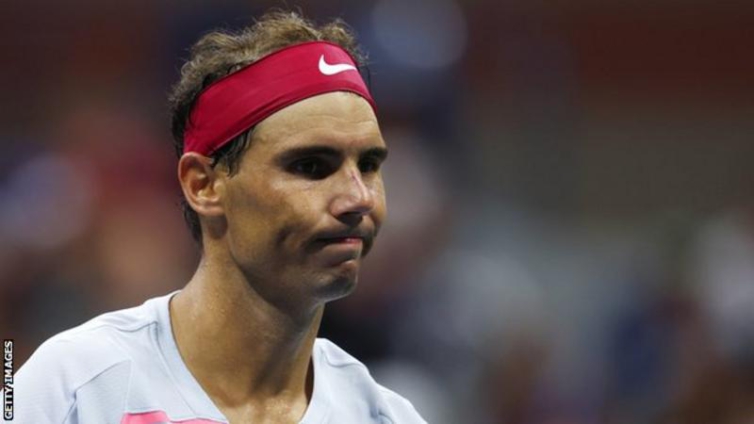 Rafael Nadal says he does not know when he will play again after losing in the US Open fourth round.

The 36-year-old Spaniard, whose wife is pregnant, was beaten in four sets by American Frances Tiafoe on Monday.

“I need to go back. I need to fix things, life, then I don’t know when I’m going to come back,” said the 22-time Grand Slam champion.

“I’m going to try to be ready mentally. When I feel that I will be ready to compete again, I will be there.”

Nadal is scheduled to be playing in the Laver Cup, alongside Roger Federer, Novak Djokovic and Andy Murray, in London from 23-25 September.

The loss to 22nd seed Tiafoe was Nadal’s first defeat in a Grand Slam this year.

The US Open, which he was bidding to win for a fifth time, was only the second tournament he had played since pulling out of the Wimbledon semi-finals with an abdominal injury.

After an opening defeat by Borna Coric in Cincinnati, Nadal went to New York and was never fully comfortable in his opening two wins.

The second seed improved against France’s Richard Gasquet but was overpowered by Tiafoe in front of a raucous home crowd in New York.

“The difference is easy: I played a bad match and he played a good match,” said Nadal, who won the Australian Open and French Open titles this year.

“Tennis is a sport of position. You need to be very, very quick and very young. I am not in that moment any more.”

Nadal’s defeat – along with that of Marin Cilic – means there will be a first-time Grand Slam winner in the men’s singles.

DISCLAIMER: The Views, Comments, Opinions, Contributions and Statements made by Readers and Contributors on this platform do not necessarily represent the views or policy of Multimedia Group Limited.
Tags:
Rafael Nadal
US Open