US President Donald Trump has reportedly fired the director of the US Secret Service.

Randolph Alles is one of several Department of Homeland Security (DHS) officials being ousted on Monday, says the BBC's US affiliate, CBS News.

Mr Alles' departure comes a day after DHS Secretary Kirstjen Nielsen tendered her resignation under pressure over the situation at the US-Mexico border.

Dozens of top officials have exited the Trump administration since 2017.

The White House confirmed Mr Alles would go, but did not say whether Mr Trump fired him.

Press secretary Sarah Sanders said in a statement: "Randolph 'Tex' Alles has done a great job at the agency over the last two years, and the President is thankful for his over 40 years of service to the country."

She said Secret Service careerist James Murray would take over as director in May.

Mr Alles reported directly to Ms Nielsen, who announced her resignation on Sunday, after facing increasing pressure to do so from Mr Trump.

The Republican president had repeatedly accused Ms Nielsen of not being tough enough on border security.

Also on Monday a US judge blocked the Trump administration's immigration policy of returning asylum seekers to Mexico while they wait for their cases to be heard.

The order is not due to go into effect until 12 April, giving US officials a chance to appeal the ruling. 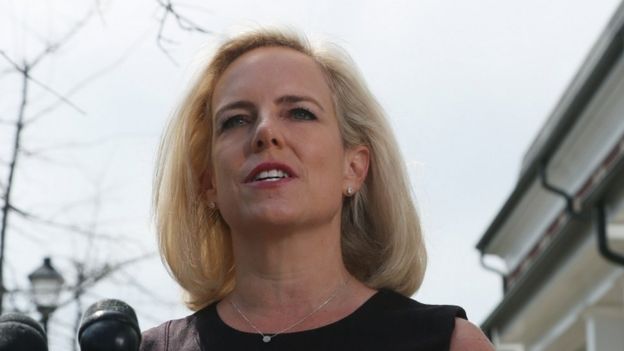 Image caption: Ms Nielsen was responsible for the proposed border wall with Mexico and the separation of migrant families last year

Mr Trump recently withdrew his nomination of Ron Vitiello to lead Immigration and Customs Enforcement for similar reasons, saying he wanted to "go in a tougher direction".

CBS reports that Mr Alles was asked to leave around 10 days ago – before a 30 March incident where a Chinese woman carrying a malware device allegedly lied to access Mr Trump's private Florida golf club, Mar-a-Lago.

Senate Democratic leader Chuck Schumer on Monday called for Mr Alles to testify before Congress regarding "potential security vulnerabilities at Mar-a-Lago" in the wake of the woman's arrest.

Last week, Mr Trump said he "could not be happier" with the Secret Service.

"Secret Service has done a fantastic job from day one," he said. "Very happy with them."

However, the department's undersecretary, Claire Grady, should have been automatically appointed as acting secretary, as the senior Senate-confirmed official.

There were reports on Monday that Ms Grady, too, may be leaving her position.

Citizenship and Immigration Services Director Francis Cissna and Office of the General Counsel's John Mitnick are also reported to be on their way out.

A DHS official described the shake-up to CNN as "a near-systematic purge", and said senior White House adviser Stephen Miller – known for his tough stance on immigration – was behind the push to replace the top levels of DHS with similarly hard-line officials.

Mr Alles was appointed by Mr Trump in April 2017. A former two-star Marine Corps general, he was the first Secret Service director in at least a century not to have come from within the agency.

A number of officials in the Trump administration are serving in an acting capacity, including the president's own chief of staff, Mick Mulvaney.

Interim secretaries are also in place at the Departments of Defence, the Department of the Interior and the Office of Management and Budget, among other federal agencies.