The US Senate has thrown out four gun control bills in the aftermath of the Orlando night club massacre, in a move that was expected.

The votes came after one Democrat took the House floor last week for nearly 15 hours to demand action on gun control.

Though partisan differences plague debate in the Republican-dominated chamber, the bills reflect a shift in American sentiment on guns.

Forty-nine people were killed at the Pulse nightclub in Orlando.

During the shooting, gunman Omar Mateen pledged allegiance to the self-styled Islamic State group, which is intensely hostile to homosexuality. Witnesses said Mateen had been a patron at the nightclub several times.

The Senate voted down legislation that would have closed a gun show loophole and expanded background checks.

Connecticut Senator Chris Murphy, a Democrat, held the floor on Wednesday night in a "filibuster," a tactic that enables lawmakers to block proceedings.

The filibuster came to an end when Republicans eventually pledged to hold votes on measures for expanding background checks and preventing people on terrorism watch lists to obtain guns.

Senator Susan Collins from Maine is working with Senator Kelly Ayotte, both Republicans, on a compromise bill to prohibit the sale of guns to terrorism suspects on the no-fly list, and create an appeals process for people who might be on the list by mistake. 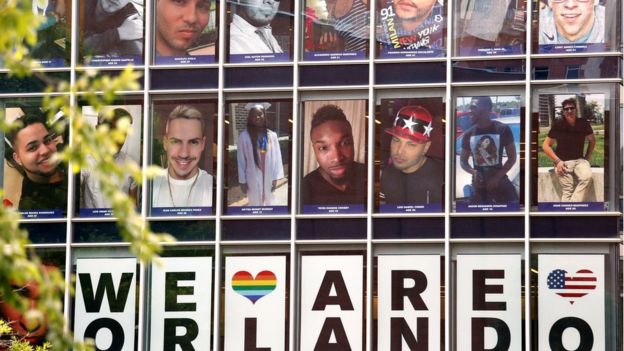 In Orlando, 49 people were killed inside of a gay nightclub

Republicans are concerned that without enough "due process", law-abiding Americans wrongly named on watch lists would be prevented from buying weapons.

Democrats say the bar is set too high on the bill from Senator John Cornyn of Texas, which would require law enforcement to make a case within three days that someone had committed terroristic activity.

Mr Cornyn's bill is supported by the powerful National Rifle Association (NRA), which has significant influence on many lawmakers, especially Republicans.

The senator said Mrs Collin's bill does not have enough protections for people mistakenly on the no-fly list.

"The Cornyn bill, which is the last version that I saw, creates a really impossible hurdle for the FBI," said Democratic Senator Cory Booker of New Jersey, speaking on CNN.

He said the measure would simply drive suspects to buy guns off the internet instead.