VGMA is not meant to celebrate only secular musicians - Diana Hamilton - MyJoyOnline.com

VGMA is not meant to celebrate only secular musicians – Diana Hamilton 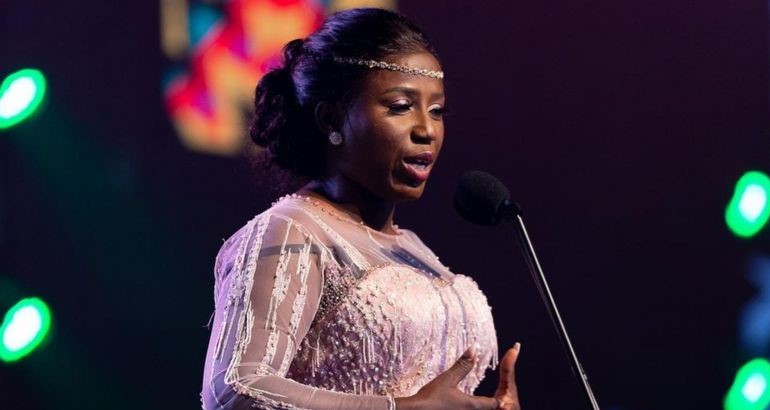 Gospel Artiste, Diana Antwi Hamilton, has urged stakeholders in the music industry not to perceive the Vodafone Ghana Music Awards (VGMA) as a scheme designed to honour only secular musicians.

The ‘Adom’ hitmaker, in an interview on Prime Morning, underscored that it is essential to recognize the VGMA as a platform to spread the gospel and win souls for God.

“It is a corporate scheme, it’s not a secular scheme. It is a scheme that is awarding everybody in their field of work and so gospel deserves to be there,” she said.

Her comments follow several assertions being made about the dominance of secular acts in the award scheme, coupled with the limited slots or nominations given to gospel musicians.

For many, the gospel artistes fail to meet the standards needed for winning the ‘Artiste of the Year’ award, thereby giving secular musicians bigger opportunities to win most of the prizes.

Diana Hamilton, the crowned ‘Artiste of the Year’ at the 2021 Vodafone Ghana Music Awards (VGMA), wants Ghanaians to know that “Jesus came for everyone.”

“On the night, there was a gentleman who sat in front of me and that was the first time he heard the song ‘Adom.’ We thought Adom had done what it could but if not for anything, we won a soul, and just by doing VGMA, all the figures are going up and that’s our way of proclaiming the gospel,” she told Daniel Dadzie on Monday, June 28.

She is the first female gospel musician to have won that biggest award, and becomes the second from the gospel fraternity after Joe Mettle won it in 2017.

She noted that KiDi deserves to be celebrated rather than being trolled for his “I will be back” comment.

“When you’re nervous, you say things. Let’s go easy on the gentleman. I think he’s acted as a fine gentleman; he picked four awards so let’s congratulate him on that,” she appealed.

Meanwhile, KiDi has stated that he does not regret anything that happened on Saturday at the awards ceremony.

Taking to his twitter platform, the “Enjoyment” hitmaker thanked God Almighty as well as Ghanaians for the support given to push him to be part of the nominees worthy of being crowned the overall artiste of the year.

He stated: “To God be the Glory. Thank you Ghana. Huge congrats Aunty Diana.”