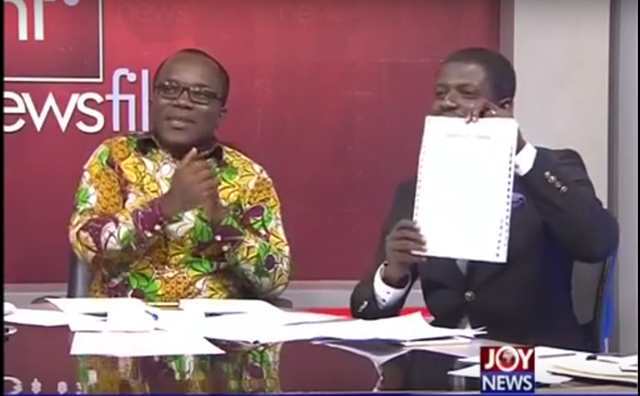 The authenticity of a memo allegedly detailing the vehicles that the previous National Democratic Congress (NDC) government handed over to the current government has come under scrutiny.

On Saturday, all three Panellists and the Host of Joynews/ Joy FM’s news analysis programme, Newsfile, doubted the genuineness of the memorandum presented by a government communicator, David Asante, to justify claims that only a little over 400 vehicles were handed to the current government.

The document, according to the Host and the Panelists, lacks the basic features of a memo, especially one that was purportedly prepared by an official at the seat of government.

The memo, “HANDING/TAKING OVER CERTIFICATE”, had no identifiable author.

David Asante, however, said the memo was handed to the current administration by one Sule Abubakar, a “Logistics Officer” in the previous government.

The document gave a 30-page detail of some 426 vehicles that was expected to be in the Presidential pool of vehicles, of which only 218 vehicles can be accounted for.

However, Evans Mensah, Host of the show, surmised that the lack of signature and name makes the document's authenticity hard to take.

This assertion was supported by two Panelists, Professor Ransford Gyampo and Kwame Jantuah, who also thought the first page of the memo does not command credibility.

Professor Gyampo described the document as “an unnamed memo”.

Former NDC MP for North Dayi, George Loh, said the document is part of the “cock and bulls story” the current administration is telling to the public to justify a plan to purchase brand new vehicles.

Watch that segment of the 3-hour programme in the video link below.

Officials of the NDC who saw the allegation as targeting their integrity responded with a claim that the allegation of missing vehicles is to pave way for plans by the new administration to purchase brand new vehicles.

Meanwhile, the matter is getting murkier as both the former Deputy Chief of Staff, Johnny Osei and office of the Administrator General (which stocks government assets during a transition) give different figures.

Mr Osei released a document that sought to prove that all 641 vehicles at the Presidency were handed over to the current administration, but the Administrator General's office said a document detailing about 674 vehicles have been handed to it.