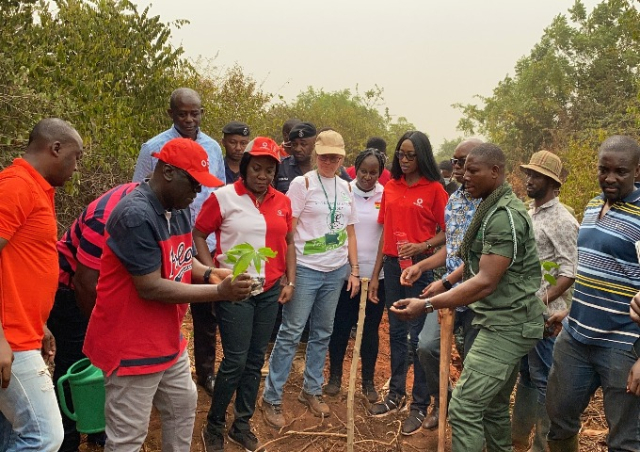 Vodafone Ghana in partnership with the Forestry Commission and the Ghana International School (GIS) has embarked on a tree planting exercise across the country as part of efforts to protect wildlife and preserve oxygen.

The planting of over 3,000 trees on a 15-acre land at the Achimota Forest marked on Valentine’s Day was the telecommunication company’s way of showing love to humanity.

Speaking at the event, the Chief Executive Officer (CEO) of Vodafone Ghana, Patricia Obo-Nai said, the exercise was in line with Vodafone’s commitment to give back to society as part of its Purpose-Led agenda.

“Our remit as a company goes beyond just making profits. Forest loss is one of the major causes of Climate Change, and the biggest environmental challenge facing everyone as a result of its adverse impact on food production, water availability, wildlife and human health.”

”Trees are a crucial factor in human existence not only because they produced food but also because they play an important role in the carbon cycle. Trees filter water bodies, provide habitat to terrestrial biodiversity, absorb harmful carbon from the atmosphere, and are serve for medicinal purposes.

We believe that if every Ghanaian decides to plant and grow one tree, the country would have 20 million trees to reverse the forest depletion. This is why we are giving employees seedlings to grow at home and in their backyard, as part of the project. And it is our belief that this tree-planting project will inspire Ghanaians and other organisations to start thinking about the planet and how they can also contribute,” she added.

Mrs Obo-Nai said Vodafone had other planet-saving initiatives for the year such as the ‘Handset Recycling Initiative’ where it would encourage customers to submit old and obsolete phones at any Vodafone retail shop for the company to properly dispose or recycle them.

“We are also gradually fading out single-use plastics from Vodafone’s offices and retail shops. The campaign, which started barely a week ago, has already changed the culture across Vodafone’s operations. Nowadays, you will realise that instead of giving bottled water, which will be disposed of after usage, we decided to come with water dispensers,” she concluded.

On his part, the Executive Director of the Forestry Commission, Kwadwo Owusu Afriyie, popularly known as “Sir John”, commended Vodafone Ghana and GIS for the initiative. He gave the assurance that the Commission would support Vodafone to ensure that the trees planted were well maintained to grow well.

He appealed to other organisations, religious bodies, communities and social groups to visit the Commission for trees to plant to promote a green and healthy nation.

Angela van der Puije, a Special Education Needs Coordinator of GIS, said her school was passionate about helping to protect the environment through best practices and eradication of land degrading activities.