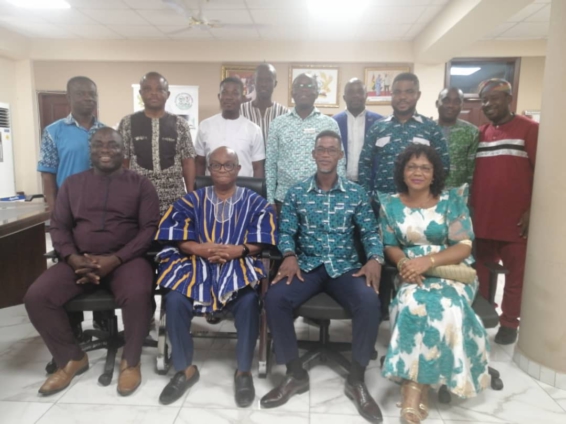 He acknowledged that the image of the NHIS has improved considerably in the past few months and applauded the Governing Board and Executive Management for turning the NHIA into a reputable public institution.

In his office on Friday, Dr. Archibald Letsa was addressing a delegation from the NHIA led by the Acting Director of Administration, Mr. Raymond Avinu.

The delegation was there to pay homage and as well express gratitude to the  Regional Minister for his tireless efforts in turning around the fortunes of the region which emerged as the best performing region in the year 2022.

The delegation took advantage of the courtesy call and officially informed the Regional Minister about Mr. Raymond Avinu’s honor as Ghana’s Best Administrator for the year 2022, bestowed on him by organizers of Ghana Leadership Awards at the La Palm Beach Hotel in Accra.

Dr. Archibald Letsa called for further strengthening of the relationship between the Volta Regional Coordinating Council (VRCC) and the NHIA.

He urged Mr. Avinu to continue to serve as a shining example of good leadership to the youth of the Volta Region and the nation at large. “Don’t let us down wherever you are.”

The Regional Minister praised the Chief Executive, Dr. Bernard Okoe-Boye and the NHIA  Governing Board for implementing remarkable policies including restructuring of the organogram to create career progression, fast-track staff promotions and motivate them to give off their best.

Mr. Avinu described the Volta Regional Minister as an intergenerational leader whose guidance and support contributed to his achievements so far as the NHIA Acting Director of Administration.

Mr. Avinu reminded Ghanaians to revive the spirit of voluntarism  to sustain the nation’s enviable status as the beacon of peace in the Sub-Region.

The NHIA Volta Regional Director, Joseph Homenya praised the Regional Minister for grooming the youth of the region to be Ambassadors of Change.

DISCLAIMER: The Views, Comments, Opinions, Contributions and Statements made by Readers and Contributors on this platform do not necessarily represent the views or policy of Multimedia Group Limited.
Tags:
NHIA
Volta Region