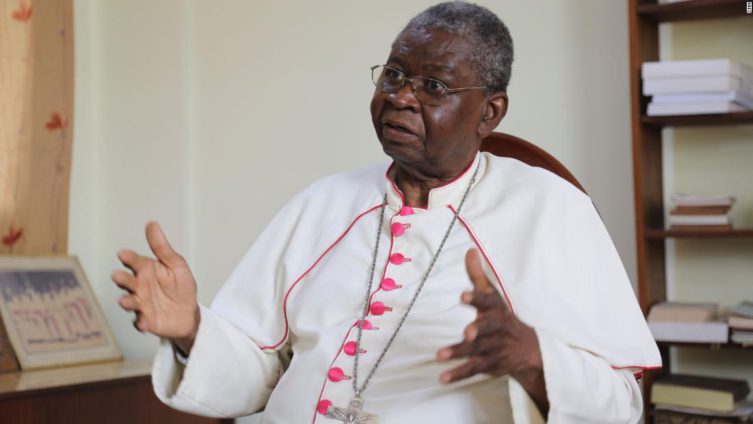 Most Rev Philip Naameh, President of the Catholic Bishops' Conference

The Catholic Bishops’ Conference has taken a swipe at government for failing to engage in broader consultation to fix the country’s current economic situation.

They say until government realises the need to draw the expertise of others in its economic and social decisions, the country may head towards disasters.

President of the Conference, Most Rev. Philip Naameh, made this remark at the annual plenary assembly of the Bishops’ Conference at Donkorkrom in the Eastern region.

“When the government thinks that its people, its tribe has all the competencies or its clan and ignores the others, we can experience disasters.

“Therefore, let us consider the whole of Ghana as one family and try to draw the competent people from all the regions and listen to them – what expertise they may have and we will see that Ghana will build up itself in a very exemplary way,” he said.

This year’s annual plenary assembly which is under the theme, ‘For a synodal church communion, participation and mission in the light of the new evangelisation in Ghana’, was hosted by the Donkorkrom vicariate of the church.

The conference seeks to take stock of the church’s activities and deliberate on issues of national concern.

In his address, Rev Naameh, while urging the government to eschew acts of nepotism, called on it to as a matter of need take another look at involving civil society organisations, the church and other political parties in the ongoing IMF negations.

“…this is because they have knowledgeable and competent persons in every sector of the economy who will be more than willing to offer their expertise in the service of the nation.”

“Some of these CSOs can be part of negotiations or the signing of economic agreements between the government and other agencies. For instance, government could involve some of them in the IMF negotiations or programmes, also other political parties could be consulted on the national policies even if they are in opposition,” he added.

Most Rev. Philip Naameh also cautioned against diverting the national cake for a few friends and family members.

“We all know that the country is currently going through an economic crisis largely occasioned by external factors. However, the President of the Republic, Nana Addo Dankwa Akufo-Addo, in his address to the nation on October 30, outlined some pragmatic measures being implemented by the government to ameliorate the suffering Ghanaians are going through.”

“I wish to assure you that government remains committed to exploring all workable avenues and solutions in dealing with the current economic difficulties such as rising inflations, depreciation of the cedi and an increasing general cost of living,” Mr Seth Kwame Acheampong assured.

DISCLAIMER: The Views, Comments, Opinions, Contributions and Statements made by Readers and Contributors on this platform do not necessarily represent the views or policy of Multimedia Group Limited.
Tags:
Ghana Catholic Bishops' Conference (GCBC)
Most Rev Philip Naameh
President Akufo-Addo
Seth Kwame Acheampong