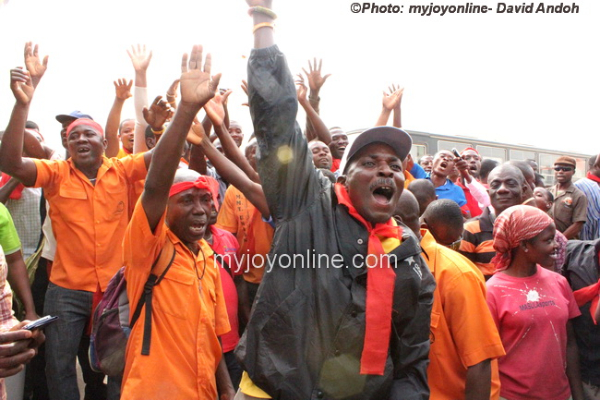 The leadership of the Junior and Senior Workers Union have warned the safety of the embattled Deputy Managing Director, John Awuku Dzuadzah cannot be guaranteed as he returns to office.

Some workers of the state-run transport company, Metro Mass Transit, on Wednesday laid siege at the Kaneshie office of the Deputy Managing Director of the company.

They chanted war songs and hurled invectives at the embattled deputy MD, John Awuku Dzuazah, whose dismissal the workers have been demanding for weeks now.

Police had to whisk him away to safety.

Officials of the Transport Ministry led by the Chief Director, T.A Selby quickly rushed to the Kaneshie office of the Metro Mass Transit and implored the workers union to backdown their calls for the Deputy Managing Director's head and allow him entry at the office.

But leadership of the workers union say it would be difficult convince their members to change their plans.

Engineer John Awuku Dzuazah was entering his office for the first time after Monday’s strike by workers over his dismissal and that of the Board Chairman, Osabarima Ansah Sasraku  III.

But shortly after the meeting with officials od the Transport  Ministry, Chairman of the Senior Staff Union, Delali Kumah who tried to calm the workers told  Nhyira Fm it would be difficult to persuade the workers.

" On hearing what happened this morning, the Chief Director for the Ministry of Transport promptly  drove in and asked that we  calm our members down whilst they work assiduously at our issues so that the DMD could return to work. We told him it is difficult on our parts because we cannot guarantee his personal safety if he reported  to work in this condition". Mr Delali Kumah said.

The workers are angry at Mr. Dzuazah and accused him of  breaching company policy by nicodemously picking up a new Landcruiser vehicle meant to replace his official accident vehicle.

According to Mr Delali Kumah says the leadership of the union will start engaging members of the two unions for a possible resolution.

But he concedes the leadership will have a difficult task persuading the members to accept the return of the Deputy Managing Director back in office.

"We are now going to engage the workers and the vibe that we pick from them will determine what actually we could do or we could not do.

From the action that was undertaken this morning is very difficult- it's an uphill task but we will still test their pulse. We will try our best to see how we can convince them to allow him to return". Delali Kumah explained.