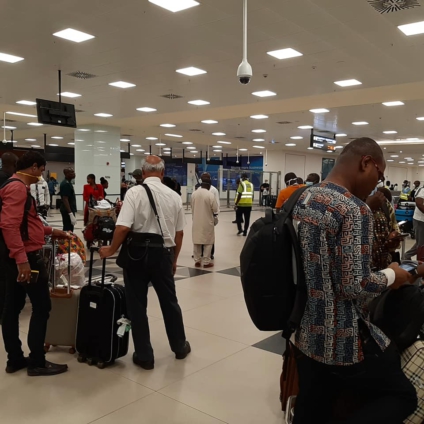 A Fellow at the Center for Democratic Development (CDD) Ghana says the reopening of the country’s air border is not to blame for the new surge in active Covid-19 cases.

Kwame Sarpong Asiedu, who is also a pharmacist said the recent surge is a result of people’s failure to adhere strictly to the Covid-19 safety protocols.

“If you look at [a breakdown of the cases as reordered on the Ghana Health Service website], as of today, only 0.3% of our case load is coming from the airport.

“[But we know] the airports accounts for about 52% of all the tests we do on a daily basis,” he said on the Super Morning Show.

His comment comes on the back of the announcement of a new surge in active Covid-19 cases in the country by President Akufo-Addo.

Though the President attributed the new development to the failure of citizens to observe the Covid-19 safety protocols, a school of thought had argued that the surge is as a result of the reopening of the country’s air border to traffic.

According to him, although the airport contributes to the huge number of tests recorded in the country, only a few are positive.

“There isn’t any logic to those who argue that uptake in numbers is as a result of the borders.

“It’s in the community and it’s mainly because of our crowd enhancing activities,” he said.

He further noted that citizens must act responsibly if indeed, the country is serious about defeating the virus.

“The only way to deal with this is for us to get our risk communication right by knowing that, it’s down to us and unless we start behaving properly, this is not going to end,”.