We don’t agree with interdiction of KNUST SHS headmistress – NAGRAT 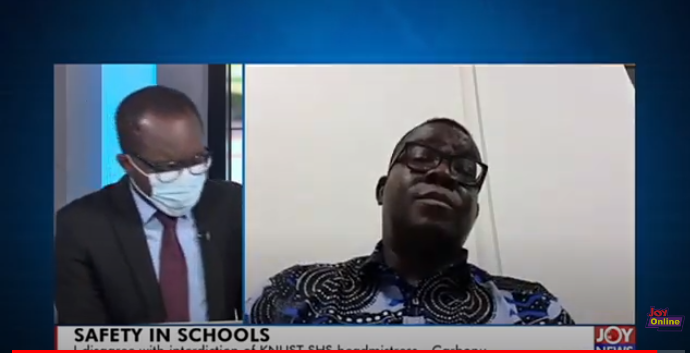 President of the National Association of Graduate Teachers (NAGRAT), Angel Carbonu has mounted a strong defense against the interdiction of the KNUST Senior High School’s headmistress following the alleged neglect of a student who had complained of stomach upset which had ultimately led to his demise.

According to him, the headmistress had not contributed in any way to the demise of the student and thus should not be punished for it.

Speaking on JoyNews’ PM Express, Angel Carbonu stated that, per his own investigation into the circumstances leading to the untimely demise of the student, he believes the school authorities were right in their actions.

“In fact, the father’s initial insistence was to take the boy home but he was advised that looking at the situation and the fact that the situation was getting a bit worse, decided that he take the boy to, I think, Manhyia Hospital or something like that where the boy died,” he shared.

He stated that the school’s authorities had been following health practitioners’ directives concerning suspected cases of coronavirus thus explaining the impression that the teachers had neglected the boy while he was in pain.

“The situation is that some instructions given to teachers by health practitioners indicate that when you get somebody who is showing symptoms of coronavirus, you do not go about to pick the person or carry the person, but the first thing you’re to do is to quickly alert health practitioners who are properly clothed, properly trained to come in and handle the situation. That is the directive given to teachers.

“So to be very honest with you, nothing untoward happened over there because the teachers couldn’t, because, we are all in a paranoid state with regards to this disease and people are scared in the first place so I don’t know why people are concluding,” he stated.

According to him, he fears the headmistress may lose her job over the incidence even though he believes she had no hand in the unfortunate.

“It has never happened in the history of Ghana Education Service. Maybe this may be a novelty, we wait to see but I disagree with the interdiction of the headmistress.”

He called for the headmistress to be reinstated as investigations into the matter continue.

According to him, the headmistress has no reason to interfere with the investigations thus should be allowed to go back to work.

“I don’t see this situation as a situation where she would want to even defend or protect anything because how did she contribute to the death of the student? Was there something that she should have done that she did not do?

“The schools are attached to health institutions, but are we sure that when the school’s authority picks a telephone to call that health institution, they have the personnel – enough number of personnel to rush to that school in relation to the burden of responsibilities that they have in the various hospitals?

“You know very well that in this country when you call an ambulance the hours it takes for the ambulance to arrive and so on and so forth. I do not even know how the headmaster or the headmistress would be interested in interfering with any investigation.

“And well investigation can go on but I don’t see this case as a case where any head of institution would want to interfere with anything,” he said.

DISCLAIMER: The Views, Comments, Opinions, Contributions and Statements made by Readers and Contributors on this platform do not necessarily represent the views or policy of Multimedia Group Limited.
Tags:
Angel Carbonu
KNUST shs
NAGRAT