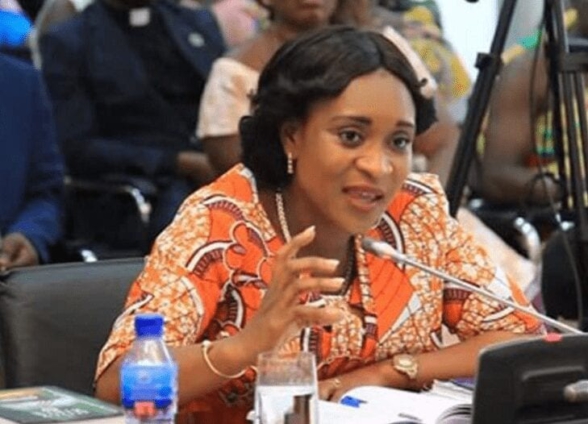 A Deputy Finance Minister, Abena Osei Asare has called on all and sundry to help turn the economy around.

This is in the wake of prevailing economic challenges coupled with the recent downgrade by a rating agency, Fitch, which downgraded Ghana’s Long-Term Foreign-Currency (LTFC) Issuer Default Rating (IDR) to ‘CCC’ or junk status from ‘B-‘.

In an interview on JoyNews’ Business Edition of PM Express, Madam Opare Asare admitted that Ghana is facing an economic downtown.

Madam Osei Asare stated that with the current situation, “this is the time that we need all hands on deck to see how best we can support government to get out of the situation we have found ourselves in as a result of both global and domestic challenges.

“Yes, things have been tough. once Ghana is thriving we are all thriving and we are in this together and hope to solve this together,” she said.

Madam Asare’s call for all hands on deck comes after former President John Mahama called on government to overlook its embarrassment for failing to address the country’s economic challenges and urgently engage stakeholders to revive the economy.

In an article, the 2020 candidate for the opposition National Democratic Congress (NDC) said the reckless election-related expenditure in 2020 is the reason for the catastrophic state of the country’s economy.

He therefore, urged government to “create a platform for urgent and constructive dialogue among stakeholders with the view to fashioning out a robust set of policy responses to the economic challenges before we get to the point of no return.”

John Mahama said while the various challenges facing the economy pose trickle-down severe hardships to Ghanaians, the Akufo-Addo government has rather remained dispassionate and calm about the economic crisis bedeviling the country.

He noted that government’s response by introducing the E-levy to shore up revenue to fix the ailing economy is regressive and harsh.

“It is very clear that urgent intervention is required to avert a total collapse of the economy. Yet, President Nana Akufo-Addo and his Head of the Economic Management Team, rather appallingly, remain nonchalant in the face of this serious crisis and have limited their response to the imposition of very harsh and regressive tax measures,” John Mahama said.

Meanwhile, the President of the Republic, Nana Addo Dankwah Akufo-Addo has assured Ghanaians that his government will restore the economy to its thriving form.

The President said the current state of the economy is a temporary one.

Speaking at the NPP National Delegates Conference on Saturday, July 16, 2022, President Akufo-Addo said the New Patriotic Party has a tradition of reviving Ghana’s economy whenever there is a challenge.

“We took Ghana out of HIPC in President Kufuor’s time. We took Ghana out of the derailed IMF programme of 2015, our party was the one that made it possible for us to survive the Covid pandemic with one of the lowest mortality rates of any government of any country anywhere in the world.