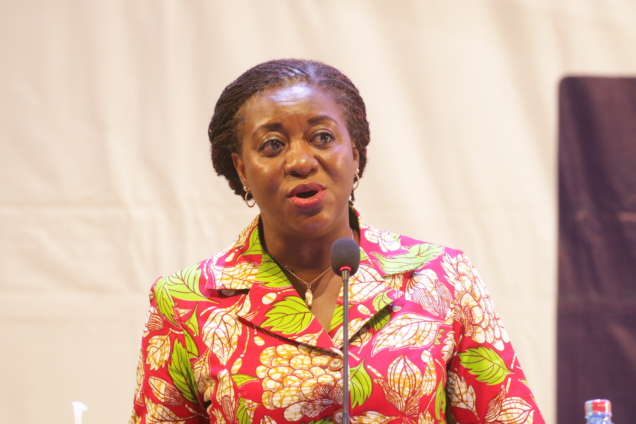 The flagbearer of the Progressive People’s Party (PPP) Brigitte Dzogbenuku says to address the concerns of insecurity in the country, her government will work towards depoliticising the security service.

According to her, the interference of political actors in the affairs of the security agencies as well as the recruitment of unqualified personnel into the service in recent years is partly to be blamed for the growing sense of insecurity being experienced in some parts of the country.

Speaking at the Minority Political Parties Debate held at the University of Professional Studies, Accra, Brigitte Dzogbenuku explained that freeing the security service from the influence of political parties, will enable the agencies to enforce their authority and “put the fear of God into people who are seen as criminals.”

She said her government would allow the security services to work independently and fully equip them to carry out their duties effectively.

“And therefore to enforce the law, you need the security service to be fully equipped enough in order to be able to apprehend some of these criminals and enforce the law,” she said.

She said a failure to depoliticise the security institutions leads to election violence and other related actions, thus it is a matter of urgency to cease the political interference in the country’s security services.

“We should make sure that the institutions that exist now are given the power to work well by themselves. That is the problem now, they should be given the leeway to take their own decisions and to work without interference from other people. Then they can enforce their own laws, they can work according to the law rather than be influenced as we’ve seen in cases like election violences and stuff like that.

“When there are cases like that what becomes of the report that we get? The state institutions are not being allowed to work because there’s a lot of interference and this is why we should allow these institutions the leeway to work and enforce their own laws,” she said.

DISCLAIMER: The Views, Comments, Opinions, Contributions and Statements made by Readers and Contributors on this platform do not necessarily represent the views or policy of Multimedia Group Limited.
Tags:
Brigitte Dzogbenuku
Election 2020
Security Services