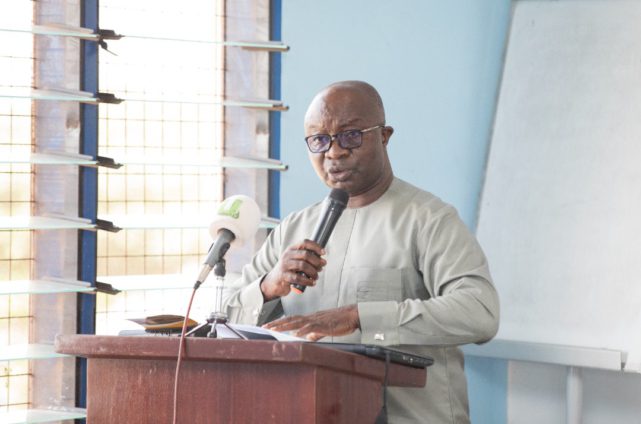 Executive Director of the National Service Scheme (NSS), Osei Asibey Antwi, says the Service saved government about ¢112 million it would have spent on some 14,027 personnel yearly.

These individuals had illegally placed their names on this year’s registration list.

The NSS boss said by employing an artificial intelligence security feature known as the Metric App during the 2021/22 registration period to detect fraud and sanitise personnel data, over 14,000 ghost names on the list were identified.

These names Mr Asibey Antwi told Vice-President, Dr Mahamudu Bawumia who had paid a surprise visit to the Secretariat on Monday, could not be verified.

In the absence of this application, he noted that such names would be on the government’s payroll list, causing government unnecessary expenditure.

“During the registration, we put numbers on hold so press men started talking about it asking why we have held more than 20000.

“But we told them they could not be verified and it has been reduced to 14,000. Because of the introduction of this system, 14,027 were stopped from doing their service.

“If they had gone through, we would have been paying them ¢94 million every month. If they were given to the private sector, it means 20 per cent would be paid to us so in adding that number, it will ¢112 million. So with digitisation, we’ve been able to save mother Ghana ¢112 million every month,” he stated.

According to the NSS boss, this finding shows that the “digitisation process is the best way to go. If we want to clean the system and do justice to ourselves, we need to go that route.”

Meanwhile, Osei Asibey Antwi says his outfit is working tirelessly to address the issue of unemployment in the country.

He said the NSS is working to provide the private sector, especially the Small and Mid-size Enterprises (SME) with service personnel at no charge. These persons deployed he said will contribute to the growth of the business after training and later be employed by these institutions following their service period.

“From 2017 to 2022 deployment, building technology, construction, architecture; we have 9000 that has been produced. So in the building industry, we have the numbers. Those in the construction industry tells that the Labour component is key.

“For Agric, we have more than 16000. Maths and Statistics, we have about 12000. For those who have studied accounting, it is 40,000. We will need your support to go to the aid of the private sector, especially the SMEs. We think that we can put the number together and be able to use them to provide book-keeping.

We have done the proposal, we have started doing some of them but when we come to you and have the full endorsement. I have had discussions with GRA.

“Their accountants are also supporting us. All we need is for them to equip them (NSS) with a laptop. Assuming we can pick 20,000, give them the logistics, and take them out to the SMEs without charging them. When their businesses are built, they can also employ them. That is one of the innovations,” he explained.

Also, he proposed that National Service Personnel be employed at Call Centres instead of foreign people at banks and telecoms.

“We have realized that a lot of the big companies in the country normally do not use Ghanaians in solving their problems, especially call services. The banks and telecoms, anytime you call to make an enquiry, the call goes to India first. Why can’t we put our house together to be able to set up a Call Centre? This can create a lot of jobs.”

“Another area is in the form of Agric. We have patterned with Agri Impact. They do farming in a greenhouse. We have outsourced some of the NSS to go and understudy but they will be paid.

We have also had discussions with Exim Bank, all the NSPs going to study there, the bank will procure the greenhouses for them to grow and export,” he added.