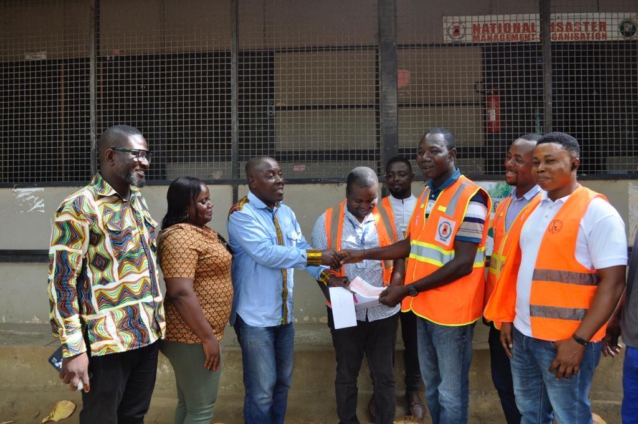 Ghanaian-owned salt company, Panbros Salt Industries Limited has presented a cash amount of ¢15,000 to the National Disaster Management Organization (NADMO) of the Weija-Gbawe Municipal Assembly to aid in the provision of logistics to support people affected by the spillage of the Weija Dam.

Prior to this donation, about 40 workers of Panbros who were personally affected by the spillage of the dam were also supported with various cash amount.

The support according to the company is part of its corporate social responsibility program geared towards supporting the vulnerable in our society especially areas close to its operations.

Leading the Panbros team to hand over the cheque, Mr. Daniel Boye disclosed that the recent spillage of the Weija Dam greatly affected the operations of the company as the water in the Densu Delta which is very close to the company’s concession overrun its banks to flood the operational area and “although the flood is receding, unfortunately about 20% of our salt production area is still flooded”.

“Notwithstanding the above challenges we cannot leave the communities to suffer. We feel obliged to live up to our corporate social responsibilities as good corporate citizens and most especially as citizens of the Weija-Gbawe community. The reason we are here to support”.

Mr. Boye urged authorities to prevent people from encroaching these water bodies to avert future disasters. “This year has been exceptionally bad for salt production as we continuously had rain from the first week of April to date without any respite coupled with the flooding as a result of the spillage of the Dam”, he bemoaned.

Mr. Emmanuel Adu-Boahen, Weija-Gbawe Municipal Director who received the cash donation on behalf of his outfit reported that about 10,000 people were affected by the flooding after the Dam spillage as such more donations are welcome to support these people. “We therefore thank Panbros Salt Industries Ltd. for being the first entity to come forth with a support”. As they have paved the way we hope to see more donations to support the victims of the flood.

DISCLAIMER: The Views, Comments, Opinions, Contributions and Statements made by Readers and Contributors on this platform do not necessarily represent the views or policy of Multimedia Group Limited.
Tags:
Donation
Flood
Weija