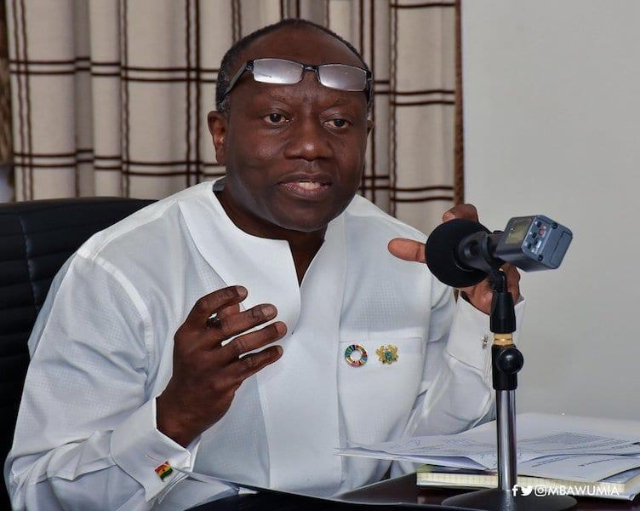 Government says it is hopeful the country’s energy sector will witness improved efficiency when ongoing reviews in the sector are completed.

A review of take or pay clauses in power purchase agreements is currently underway following the set-up of a steering committee under the Energy Sector Recovery Task Force, assigned with the responsibility to advise on Ghana’s energy sector and its long term sustainable development.

Finance Minister, Ken Ofori-Atta, announced this at a meeting in Accra on Monday, as part of engagements with stakeholders including diplomats, on recent developments in Ghana’s Energy Sector.

In his last Mid-Year Fiscal Policy Review of the 2019 Budget Statement and Economic Policy and Supplementary Estimates presented to Parliament on July 29, the Finance Minister announced government’s intention to rationalise the commercial agreements in Ghana’s energy sector.

These include reassessing all take or pay contracts and imposing a moratorium on the signing of new power purchase and gas supply agreements in the energy sector.

The Minister told stakeholders that the government has held discussions with representatives of the Independent Power Producers (IPPs) and Gas Suppliers (GSs), for a collaboration to find solutions that result in a fair outcome for all stakeholders.

“The purpose of the Steering Committee is to take responsibility for the consultation process with the IPPs and GSs over the coming months, with the objective of ensuring a well-managed transition towards a more balanced relationship with each IPP and GS towards sustainable energy partnerships,” he added.

He said the government was working hard to establish a long-term sustainable strategy for a competitive and dynamic energy sector, where private investments can thrive and the interests of the Ghanaian people and businesses continue to flourish.

“We have made significant progress, but there is still a lot to be done. We need to act urgently but in doing so, also chart a course which is respectful and fair to our private partners,” said the Minister.

Speaking on Government’s decision to terminate the PDS concession, Ken Ofori-Atta said the action was at variance with the MCC’s own position on the matter.

He explained that “the United States relied on the report of FTI Consulting, an independent auditing firm, which suggested that the concession contract was valid as of March 1, 2019. This contrast to the report submitted by the Government’s investigation team which insisted that the payment guarantee which was in issue, was invalid.

“Since July, when Government became aware of the invalidity of the payment guarantee, it first took steps to confirm the information regarding the legitimacy of the guarantee. Indeed, the resolution which Government has arrived at took some time because once Government had become fully apprised of the situation, it was keen to engage with the MCC, including a meeting between the President of the Republic and the CEO of the MCC on the sidelines of the UN General Assembly, to find a mutually acceptable common solution.”

He said government was fully committed to private sector participation in ECG and focused on moving forward with urgency to find a suitable alternative to PDS.

“We do recognise the need to improve significantly the management of ECG, by bringing in private sector expertise and attracting private capital. This will reduce losses and improve service quality, with a view to creating a financially viable power distribution sector that is sufficiently equipped to meet the current and future needs of Ghanaian households and businesses,” he explained.

Mr. Ofori-Atta announced government’s intention to present an action plan, by November 15, 2019, for the restoration of private sector participation in ECG.

DISCLAIMER: The Views, Comments, Opinions, Contributions and Statements made by Readers and Contributors on this platform do not necessarily represent the views or policy of Multimedia Group Limited.
Tags:
Energy Sector
Ken Ofori Atta