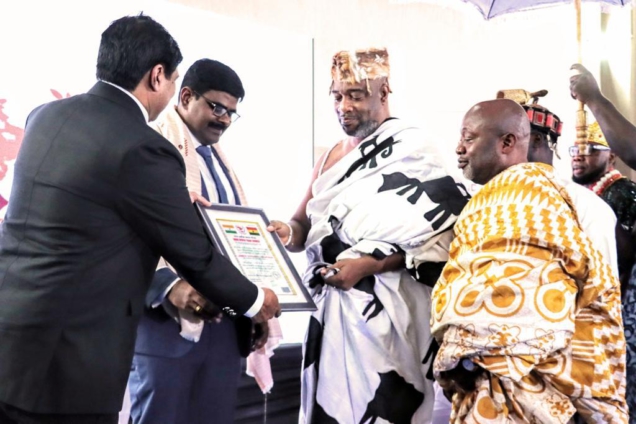 The Ga Mantse, Nii Tackie Teiko Tsuru II, and the Deputy Minister of Trade and Industry, Michael Okyere Baafi have pledged the support of the Ga Traditional Council and the Government of Ghana for the India Africa Trade Council (IATC).

They expressed their profound gratitude to the IATC for selecting Ghana as its headquarters for the West and Central Africa regions.

Speaking at the maiden IATC Trade submit held in Accra on October 18, 2022, at the World Trade Center, the Ga Mantse said he was excited about Ghana hosting the West and Central Africa headquarters of the Council.

He, therefore, pledged his fullest support to the IATC.

Mr Baafi who doubles as Member of Parliament for the people of Juabeng South and Deputy Trade Minister urged members of the IATC to embrace Ghana’s flagship industrialization programme, the One District One Factory (1D1F).

The Global President of IATC, Dr. Asif Iqbal, was in Ghana to attend the summit and to also present to Dr. James Gnanaraj Rajamani, his letter of credence, confirming his appointment as the Chairman of IATC West and Central Africa.

Mr. Iqbal was accompanied to Ghana by his vice, Wali Kashvi and Trade Commissioner of Telanga State, India, Krishna Vamsi.

In his address at the summit, Dr. Iqbal admonished businessmen and women to take advantage of international trade liberalization policies to ensure the effective growth of the business communities.

On his part, Dr. James Rajamani assured his readiness to live up to his responsibilities in coordinating the activities of the Central and West Africa sub-regions.

The three management directors of IATC were presented with a certificate of recognition from IATC Global Head Office based in India.

In attendance at the summit were: the Board Chairman of Tourism, Arts and Culture, Hon. Kwame Acheampong Boateng, Minister of Tourism and Cultural Affairs of Sierra Leone, Dr. Memunatu Pratt;
the Chief of Staff of the Ghana Armed Forces, Major General Nicholas Peter Andoh; the Ahafo Regional Minister, Hon. George Boakye; Bono East Regional Minister, Akwasi Adu Gyan; member of the Board of IATC and the Chief Executive Officer of the EIB Network, Mr. Nat Adisi (Borla Ray); as well as some selected Metropolitan, Municipal and District Chief Executives (MMDCEs).

The idea is India Africa Trade Council came about in 2020 during the peak of the coronavirus pandemic.

IATC is a non-governmental organization established in consultation with the various heads of Trade bodies in Africa and the presidents/representatives and professionals of repute from the entire Indo-African region.

It was formed with a view to giving the business communities of both India and Africa a voice and a tool to foster development.

DISCLAIMER: The Views, Comments, Opinions, Contributions and Statements made by Readers and Contributors on this platform do not necessarily represent the views or policy of Multimedia Group Limited.
Tags:
Ga Mantse
India Africa Trade Council