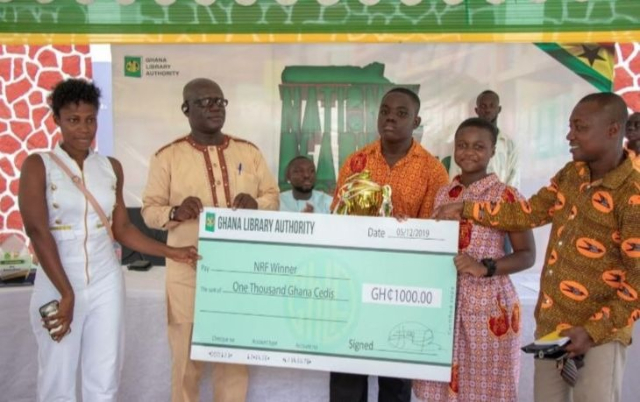 The region was represented by Samira Labram and Kwabena Osei from Tessark Preparatory School in Takoradi.

The competition which falls under the Reading Festival of the authority held across the country was part of the objective, to promote literacy and lifelong learning.

Since the beginning of the year, Reading Competitions were organized among basic schools in all regions where schools competed on a district and regional level.

The grand finale in Accra brought together 22 regional winners to compete for the coveted National prize.

In a welcome address, the Acting Executive Director of the Ghana Library Authority (GhLA), Hayford Siaw, highlighted some of the key achievements chalked in the Year of reading as a result of interventions like reading competitions and other related programs, which have created awareness on the existence of libraries across the country.

He added, “we have increased access points to the public by adding on 9 more public libraries this year and have renovated 22 libraries, among them, include Tema, Bolgatanga, Tamale and many others across the country.

“This has restored the beauty of the once dilapidated library structures making it more conducive for reading and learning.”

The competition, held at the forecourt of the Authority’s head office, was in three parts; 1st and 2nd Preliminary sections and the final quiz competition. The winners of the two preliminary quizzes later competed for the grand prize.

Representatives of both the Western and Greater Accra Regions, who came first and second respectively, were awarded cash prizes and all contestants, were given one-year free library subscription.

Mr Siaw congratulated the winners and urged all contestants to continue reading for the development of the country.

He noted that Ghana Library Authority has added over 200,000 books to its stock and advised parents and guardians, “to bring your children/wards to the libraries, register them and make good use of the books available.”

The National Reading Festival will be an annual programme to encourage reading among Ghanaians, especially children.