What is my Crime? – Ellembelle DCE speaks on his arrest over missing excavators 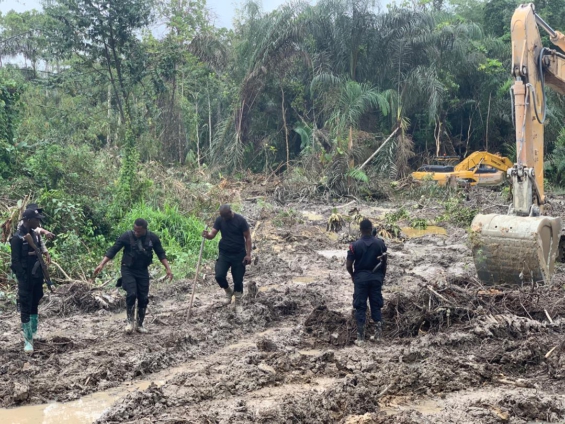 Hours before he was picked up by officers of the Ghana Police Service, District Chief Executive of Ellembelle in the Western Region, Kwasi Bonzo, told his side of the story on circumstances leading to the disappearance of two excavators.

On Wednesday, a team of operations and intelligence police officers in the Western Region retrieved one of the excavators that were reported missing in the Ellembelle District.

In a post on social media, the Police said the excavator was discovered several kilometres in a forest within the District through their operations on Tuesday, September 6, 2022.

The Service is currently undertaking investigation to recover the other excavator and arrest all those behind the act to face justice.

Meanwhile, Mr. Kwasi Bonzo and three others have been arrested for obstruction and attack against the Police officers that recovered the excavator. “While the team of Police officers was escorting the excavator to Takoradi, at the Axim Junction, the DCE of Ellembelle, Mr. Kwasi Bonzo organised and led some thugs to attack them and obstruct the operation.

Speaking exclusively to Blessed Sogah on The Pulse on Wednesday, September 7, 2022, just hours before he was picked up by the Police, Kwasi Bonzo wondered why he should be at the receiving end of punitive measures when indeed, he led the operation to the illegal mining site.

“What is (my) crime here, we as an Assembly, on the very day that we got wind of this illegal mining issues, moved to site to stop the illegal miners and impounded their excavators which was parked at a location the next day until it got missing.

So we should rather be applauded that having come to our notice as an Assembly within 24 hours, we stopped their activities. Galamsey is like any other crime, no DCE, no assembly will have the clairvoyance to be able to forecast that there would be ‘galamsey’ here or ‘galamsey’ there” he said.

Below are excerpts of the interview:

DISCLAIMER: The Views, Comments, Opinions, Contributions and Statements made by Readers and Contributors on this platform do not necessarily represent the views or policy of Multimedia Group Limited.
Tags:
Ellembele DCE
missing excavators