What we know so far about the damaged Russian ship 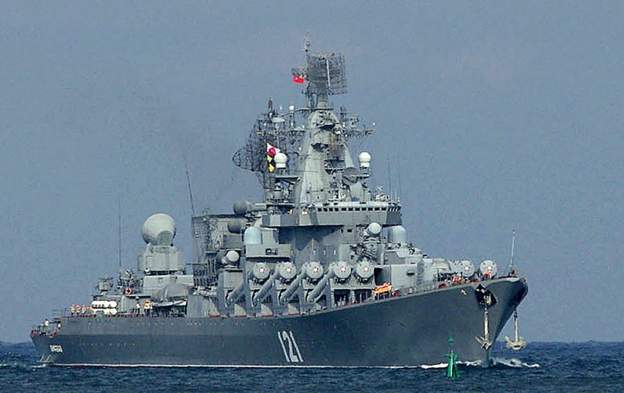 Russia’s defence ministry said that an explosion aboard Moskva, the flagship of the country’s Black Sea Fleet, has “seriously damaged” the vessel.

The ministry’s statement said: “The cruiser Moskva’s ammunition has detonated as a result of a fire on the warship.

“The vessel is seriously damaged. The entire crew have been evacuated. The cause of the blaze is being investigated.”

It did not specify the cause of the fire, saying it was under investigation.

Ukraine said the 186m-long vessel was struck by their Neptune missiles.

Ukrainian presidential aide Oleksiy Arestovych said Russian rescuers were unable to reach the vessel, which could have had as many as 510 crew members on board.

“It has been confirmed that the missile cruiser Moskva today went exactly where it was sent by our border guards on Snake Island!” Odesa regional governor Maksym Marchenko wrote in his Telegram post.

Earlier in the war, Ukrainians stationed on Snake Island in the Black Sea defied an order from the ship to surrender, telling the Moskva to “go to hell”.

What is known about the flagship?

The Moskva missile cruiser was constructed in the early 1980s in what was then the USSR.

It was the lead ship of the Soviet navy’s Project 1164 Atlant class. It was initially called Slava, but later renamed Moskva (Moscow).

The cruiser – which became the flagship of the Black Sea Fleet in 2000 – played a key role during Russia’s military campaign in Syria, which began in 2015.

DISCLAIMER: The Views, Comments, Opinions, Contributions and Statements made by Readers and Contributors on this platform do not necessarily represent the views or policy of Multimedia Group Limited.
Tags:
Damage
Russia