Where are NDC’s election 2020 figures? – Kunbuor 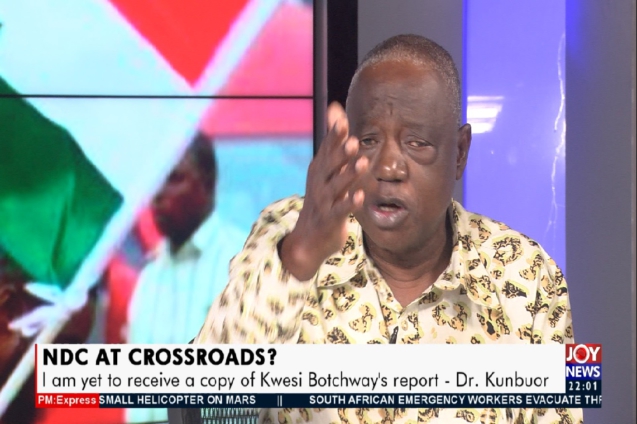 Even after the jurisdiction of the Supreme Court had been evoked through an election petition, the hearings appear not to have helped the largest opposition party in unraveling the puzzle.

Well, some cadres and leading members of the NDC have begun a series of campaigns to demand accountability from its leadership over the party’s performance in the 2020 Election and the Supreme Court Petition.

One of such fellows is Dr Benjamin Kunbuor who believes the initiative is at the very heart of the NDC’s reorganisation drive towards capturing power in the next polls.

According to the member of the NDC’s Council of Elders, the foot soldiers are yet to be convinced the party won the 2020 presidential election especially when its own collated results still remain a mystery.

Speaking to Evans Mensah on PM Express, Monday, Dr Kunbuor fears the NDC may run into credibility challenges if the leadership fails to come out with its collated results to convince the electorates.

“For the ordinary party members that you told that we have won the elections through the figures and collation that the party has done, why is it that those figures did not find their way into the court? That is a fundamental question…

“There is only one way to answer this question. Come out and put it in the public domain; this is what we collated. This was what was the outcome. This is the margin by which we won. That has not been fought coming” he said.

It may be recalled that the leadership of the opposition party rejected the Election 2020 results as ‘fraudulent’ and accused the Electoral Commission of rigging the polls in favour of the incumbent candidate. The party further went ahead to challenge the validity of then President-elect, Nana Akufo-Addo.

But Dr Kunbuor is unhappy the party grassroots have been kept in the dark and made to believe John Mahama won the election especially when the leadership is reneging to substantiate its claims.

He further revealed that the Council of Elders has since not received any copy of what the actual election figures are from the functional executives. Although some of the national executives claimed to have the figures, the former Majority leader is questioning the motive in holding on to the information.

“The party is a grassroot party. I don’t know whether people have them (results) or not. Whether they put them out there. I have not come across them. I have heard some office holders of the party say they have the figures and I say it is a social democratic party. You have this information you are sitting with, what prevents you from putting them out there so that some of us will stop being harassed on daily bases?” he quizzes.

The former Attorney General said the NDC failed to carry the grassroots along through the Election Petition hearing by instituting a parallel arrangement that keeps a conversation among the base of the party.

He added, “if you find out clearly that it is not possible for you to come out, you don’t give that impression that we won the elections.”

The leading member of the party wants the national executives held responsible and be made to render accountable for their stewardship throughout the electioneering process.

This move he said will help the rank and file of the party determine whether the leadership failed.

DISCLAIMER: The Views, Comments, Opinions, Contributions and Statements made by Readers and Contributors on this platform do not necessarily represent the views or policy of Multimedia Group Limited.
Tags:
Dr Benjamin Kunbuor
Election 2020
NDC