Why the hell will you buy ¢100k Christmas trees while owing electricity bills? – Agbodza to GACL 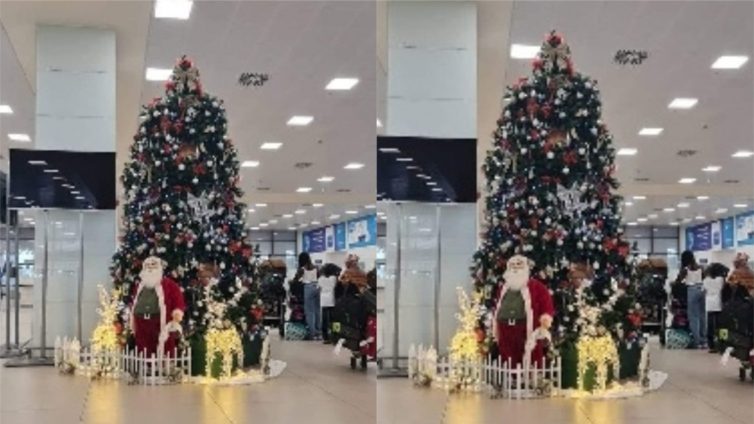 The Minority is criticising the management of Ghana Airports Company Limited (GACL) over its failure to settle arrears owed Electricity Company of Ghana (ECG), leading to power cuts in parts of the Kotoka International Airport.

In January this year, the Ghana Airport Company Limited (GACL) said it spent ¢128,366 buying Christmas trees for decorating the Terminals.

In an editorial on Accra-based Metro TV, the Board Chairman of the Company, Paul Adom-Otchere, explained that the viral photo of an invoice of ¢82,000 for the Christmas tree inspirations does not reflect the actual situation on the ground.

He said the inspirations at Terminal 2 and Terminal 3 initially cost about ¢128,000.

The Board Chair explained that the advertising company, DPP Outdoor, decided to bear ¢50,000, leaving the State to pay about ¢78,000.

JoyNews/AdomNews · Why the hell will you buy ¢100k Christmas trees while owing electricity bills? – Agbodza to GACL

Commenting on the latest development, the Adaklu MP, in an interview with JoyNews, said, “If we did not have money to pay electricity bills, why the hell were we seeing Christmas trees costing about ¢100,000 at the terminal buildings.”

This follows the National Task Force of ECG Limited, on Monday, cut power supply to the GACL over debt to the tune of ¢49 million.

Mr Agbodza insists that this amount spent on the festive decor could have been channelled into offsetting the company’s debt on ECG’s books.

With this latest issue in perspective, the Ranking Member explained that he was appalled by the matter and suspects a wider scope of mismanagement of funds at the GACL.

He is calling for a probe to forestall any potential recurrence.

“Maybe we need to combine all of it considering the circumstances surrounding the purchase of the Christmas tree and why they couldn’t pay their bills until the power was cut off. So that perhaps there may be a much more endemic miscarriage of management going on there that we don’t know,” he told JoyNews.

He also referred to the GACL’s recent debacle with McDan Aviation’s Private Jet business as one of the cases that should engage the attention of the investigation.

“We need to know the conditions under which those were approved and how come Ghana Airports Company Limited is yet to give the same approval. We need to know. The committee can’t decide that we’ve been there; I’m sure the public is waiting to hear from us.”

He also indicated that the committee will summon the minister to the House over the current situation.

According to the ECG Team Lead, Nene Shadrack Mase, the debt is affecting the operations of the ECG, hence the need to embark on such distress action.

Joy Business learned that the task force was expecting GACL to settle at least 50% of the debt, but the GACL Company opted to pay ¢1m.

This the ECG believes is not enough to cover the arrears.