Why the US is suffering a widespread drought 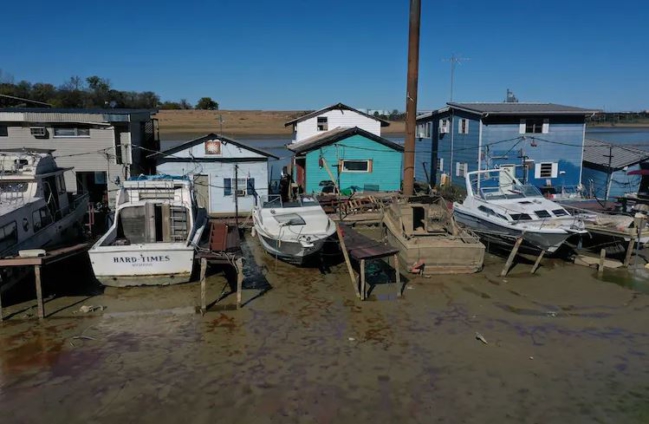 Huge swathes of the United States are unusually parched. While drought has been a persistent problem in the western US, it’s now spread across other parts of the country that aren’t typically this dry.

Nearly 60 percent of the contiguous US is experiencing drought, according to the National Oceanic and Atmospheric Administration (NOAA).

Drought hasn’t been this widespread in the nation in about a decade, and over 80 percent of the country is at least experiencing “abnormally dry” conditions, according to the US Drought Monitor — a first in the drought monitor’s 22-year history.

Drought has sparked treasure hunts in receding western water reservoirs this year: uncovering World War II-era vessels in Lake Mead and Lake Shasta. Now, the spree of newly revealed shipwrecks has spread east. Last week, as water levels neared record lows, the Mississippi River bared the bones of a ferry that likely sunk near Baton Rouge at the turn of the 20th century.

“In the past two decades, this is one of the largest coverages of drought for two reasons,” Brad Pugh, a meteorologist at NOAA, tells The Verge. There’s a long-term drought that’s been no stranger to the west, plus a short-term drought that’s developed across the midwest and southeastern US. You can see the difference in the drought monitor maps below that depict conditions in October 2021 and October 2022.

The maps are shaded to represent conditions ranging from “abnormally dry” (yellow) to “exceptional drought” (burgundy).

California’s longest drought on record stretched nearly an entire decade from December 2011 to March 2019, and the “megadrought” that’s taken hold in southwestern North America for 22 years marks the driest the region has been in at least 1,200 years, a recent study found.

Climate change has made the perennially dry region even more arid. Hotter temperatures simply dry out soil and vegetation faster. But there are other factors at play — like La Niña. The phenomenon generally shows up every two to seven years as part of a recurring climate pattern called the El Niño-Southern Oscillation (ENSO). Only when La Niña appeared in 2020, it, like everyone else about that year, wasn’t ordinary.

Expected to persist into a third winter, the world is facing a rare “triple-dip” La Niña. This marks only the third such “triple-dip” event since the 1950s, according to Pugh. It’s exacerbated the longest drought in four decades to hit the Horn of Africa.

Pugh says this La Niña is also a primary driver of the long-term drought we’re currently seeing in the western US. It’s also expected to bring on warmer and drier conditions across the southern US.

For that reason, drought conditions could expand further along the Gulf Coast this winter, according to a forecast NOAA released last week. Parts of the southeastern US already affected by the current short-term drought will probably have to live with it for the next few months.

But La Niña’s influence varies from region to region. While it tends to trigger drought across southern parts of the country, La Niña tends to bring on wetter weather in the northwest. The midwest will also be spared from La Niña-induced aridity this winter.

So after a very dry September and October, Pugh expects the short-term drought in the midwest to ease up in the next one to two weeks as a much wetter pattern begins to take shape in the central US.

Unfortunately for the southwest, it’ll likely take multiple wet years to even begin to make up for how bone dry the region has become with the current megadrought.

Hotter temperatures and diminishing snowfall will cut further into water supplies. And all this will keep forcing many communities to figure out how to live with less water than they’ve had before.

DISCLAIMER: The Views, Comments, Opinions, Contributions and Statements made by Readers and Contributors on this platform do not necessarily represent the views or policy of Multimedia Group Limited.
Tags:
Drought
US