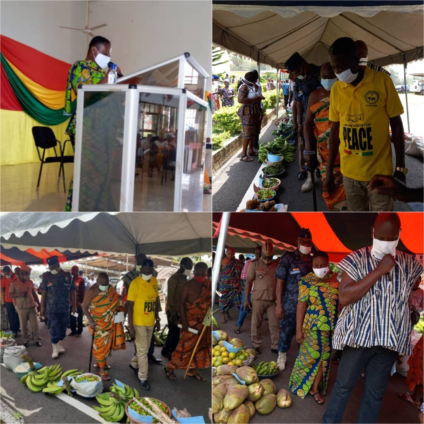 Louise Agbeve, a 55-year-old exporter of gari and other farm produce, received a certificate, tricycle, two pairs of Wellington boot, spraying machine, five pieces of cutlasses, a full piece of wax print, and a planter as her prize for emerging the overall best in the Municipality.

She cultivated 80 acres of maize and 25 acres of cassava, 25 acres of pineapple, an acre each of pepper and okra, kept 50 goats, 15 sheep, and 40 fowls in addition to having an oil palm mill, cassava graters, gari processing stoves with a workforce of 21 permanent and 86 casual staff among others.

The wife of Alphonse Kokouvi Masseme, a former Togolese Interior Minister under Eyadema regime in an interview with the Ghana News Agency said her award came as a result of dedication and perseverance and advised the youth to develop an interest in the self-fulfilling and rewarding venture.

“Farming is one sector for which you don’t get financial assistance but you can fall on family and friends for support. Aside that, you must be passionate, dedicated to what you do because there’ll be times when you’re too tired to work.

Interestingly, you’ll be the first to benefit from your toils. I’ve travelled to outside places with my husband but when I stepped at Ahiayiborkope, I knew I would be better off here. I can farm, process gari, etc and no one around me will go hungry. We need the youth to follow our steps to sustain farming and to be able to feed our future generations.”

Eighty-year old Mama Agbowada, the Best Aged Farmer with seven-acre maize farm, cassava, five, potato, two and 11 local fowls said her love for farming kept her in the profession at her age.

She prayed to God for strength so she could expand her venture and emerge the ultimate winner in the near future.

Municipal Agriculture Director, Franklin Kwaku Agbove congratulated all farmers especially the awardees saying, it was worth honouring them each year for their immense contribution to the economic well-being of the Municipality and the nation.

He said the Municipality’s target in 2019 was to help the country stop rice importation by 2022 as a major rice producing community in the region, suffered a hitch this year due to the COVID-19 pandemic, which prevented the importation of needed fertilizers.

Mr Agbove again cited the dry spell experienced between May and August resulting in the scorching of rice fields and loss of direct investments of farmers and called for the need for investors to develop fertilizer plants within the Municipality as they develop more irrigation systems to serve rice farmers at the valley bottoms.

The New Patriotic Party Parliamentary Candidate for Ketu North, Kofi Dzamesi said residents and Ghanaians should retain the current government in power for better policies and programmes for farmers.